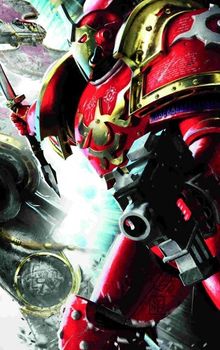 Izzakar Orr was a Librarian within the Thousand Sons Legion during the Great Crusade, and due to his efforts many Humans were freed from the ignorance brought upon them by Old Night.

His quest to better Mankind came to an end however, when Prospero was invaded by the Imperium, because of the misguided actions of their Primarch, Magnus. During the invasion, Orr's temple was attacked by the Wolf Lord Bulveye's Thirteenth Great Company and the Thousand Sons under the Librarian's command fought to protect the large library that filled the temple. Though they made the Wolves pay in blood for every step they took, many of the Thousand Sons fell in battle and they could not stop the Wolves from ravaging Orr's library. Soon only the Librarian and a small group of Thousand Sons were left defending the temple and Orr knew they would die if they stayed there. He brought his remaining followers to a Webway Portal within the temple to escape, but was confronted by Bulveye before he could activated it. Orr was then shocked, when the Wolf Lord implored the Thousand Sons to stop fighting and accept the Space Wolves' judgement, for their transgression against the Emperor. The incredulous Librarian yelled that the Space Wolves were traitors and murders, who attacked his Legion without reason and destroyed his library, which was filled with knowledge that could have bettered Mankind's future. His words did not sway Bulveye however, and as the the Space Wolves advanced upon his position, Orr quickly completed the ritual to activate the Webway Portal and escaped within it with his group of followers.[1]

The Space Wolves pursued them, but while Orr knew the rituals that would allow him to safely navigate the Webway Network, constructed by the Thousand Sons, the Wolf Lord and his Great Company blundered blindly through them. The Space Wolves were now no longer a threat to the Librarian, as the Space Wolves only succeeded in separating themselves and becoming hopelessly lost in the Webway. However Orr realized that because the Space Wolves were not using the rituals for the Portals, they were damaging the Webway Network and threatened to destabilize it. In order to save the Network, Orr used his psychic powers, to guide Bulveye and his group of Space Wolves, to the Librarian's location within the center of the Webway and promptly surrendered to the Wolf Lord. The Librarian then explained his reason for doing so and opened a Portal that would take Orr and the Space Wolves back to Prospero. Bulveye at first seemed to consider Orr's proposal, until he asked the Librarian what would happen to those members of the Thirteenth Great Company, that were still lost within the Webway Network. However, when Orr truthfully admitted that they were likely to be eventually purged by the Network, he sealed his fate and that of his remaining followers. Bulveye was not willing to leave any of his Great Company behind, nor was he willing to disobey his Primarch's orders to take no prisoners, and calmly split Orr's head with his power axe. As the Librarian died, the Portal back to Prospero closed and Orr's remaining followers were killed shortly afterwards by the Space Wolves. After they were surrounded by the corpses of their enemies, Bulveye and the Thirteenth Great Company began searching the Webway Network for their lost kin and to kill any member of the Thousand Sons, that still remained within it.[1]

Ten thousand years later Izzakar Orr's ghost was found by Njal Stormcaller on Prospero as he sought to recover Bulveye and the members of the 13th Great Company. He became a psychic guide and oracle for Njal and his forces on Prospero. By this point Izzakar had little loyalty left to Magnus the Red.[2]