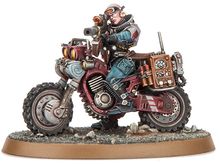 A Jackal Alphus is a Genestealer Hybrid sniper that rides a rapid-assault dirtcycle to battle, leading groups of Atalan Jackals.[1]

The undisputed leaders of Atalan Jackal packs, they are not only the deadliest and fastest of their kin but also the steeliest in nerves that can work a competency similar to Imperial Assassins. Much like standard Jackals, an Alphus' primary function is to gather information on the enemy as well as scouting new sites for a cult. They are also masters of spotting points perfect for future ambushes or hidden strikes. Though a pack leader, an Alphus is quite content to work alone and are thus able to often escape a dedicated aerial spotter network. Though they travel mainly at night to avoid attention, the Alphus can also ride for weeks under a heated irradiated sun without complaint. Their hybrid physiology lends them stamina far in excess of a standard Human and their eyesight is second to none, making them superb snipers. Their eyesight also lends to scouting, and it is not uncommon for a Cult Nexos to have hundreds of Alphus maps in their possession.[2]

When a Jackal Alphus reunites with their pack in order to take down larger prey, they lead their fellows in a manner akin to a animalistic pack leader hunting prey. Keeping out of an enemy's reach, they nip and slash at the foe's weaker points, fighting with cunning rather than brute force until the enemy is gradually brought to full immobility. This process may take hours or even days but Jackals are relentless and never pausing in their operations. Jackals are superb battlefield analysts, operating on the frontlines to take out key enemy leaders with their Sniper Rifles or calling in support and priority kill-orders should the foe be too great for them to face alone. A single set of instructions and coordinates from these leaders can bring down a Space Marine Captain or an Ork Warboss.[2]