I bring only death and leave only corpses. 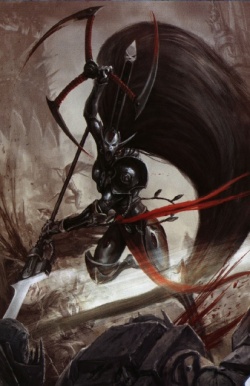 Jain Zar (translated as the Storm of Silence[2]) is the Eldar Phoenix Lord of the Howling Banshees Aspect. It is said that she was favoured by Asurmen in that, under his tutelage, she became the first of the Exarchs (the Asurya, or Children of Asur)[1][2][3].

Jain Zar was born Faraethil on the world of Eidafaeron shortly before the Fall of the Eldar. She had been left at the Kurnussei as an infant by her parents, spending her formative years as a blood-dancer gladiatrix performing for the gratification of her Master and thousands of spectators. She knew little of life outside the arena that she was largely ignorant of the Eldar Empire's pantheon of gods[8d][15a][15b].

About a year after the Fall, the young Faraethil still slew whatever enemies were brought to her at the largely empty arena. She came to realize that her Master no longer cared to see her as a combatant, merely employing her as an executioner for hapless victims[15a]. She fled into the city, and after three days found another survivor who was contemplating suicide at a temple of the old Eldar Gods. Faraethil managed to interrupt his plan, but initially he shunned her[8a].

Barely surviving the hostile environment, Faraethil attempted to return to the Kurnussei several years later to steal weapons, only to be chased by the minions of her old Master. Desperation led her back to the temple with the suicidal stranger, who to her surprise turned out still alive. The pair fought back Faraethil's pursuers, and when they were all slain the stranger introduced himself as Asurmen[8b][15a].

Not yet willing to trust Asurmen with her past, Faraethil claimed she was just a child during the Fall and didn't remember anything except the death and screaming, and that she was raised by her since-deceased brother to look after herself and avoid the cults and daemons rampaging across the planet. During the fight, Asurmen noticed that Faraethil's reckless rage was liable to get her killed, so he took her on as his disciple and renamed her Jain Zar[8c][15b]. Finding the pleasure yacht used by Jain Zar's Dark Eldar pursuers, the two departed Eidafaeron and settled on an abandoned moon that they renamed Asur[8d][8e].

Originally of the Asurya, Jain Zar became the first of Asurmen's students. She and her brothers-in-arms learned well from their master, and soon set off across the stars to establish their own Warrior Aspect shrines.[6b] Unlike many of the other Phoenix Lords, her devotion to her shrines is all but unmatched and she regularly travels between many Craftworlds to instruct her deadly craft, so that now, only the most remote Craftworld does not have a shrine to the Howling Banshees. She disappears and reappears at her own whim and her shrines keep a constant vigil for her, looking for the Jainas Mor (Silent Death) and Zhai Morenn (Blade of Destruction)[1][2][3].

In the late 41st Millennium, Jain Zar hunted the Chaos Space Marine Talos Valcoran, the commander of the 1st Claw of the 10th Company of the Night Lords Traitor Legion, due to a vision by Eldar Seers who foresaw that a prophet of the VIII Legion would unify the Night Lords and lead them against the Ulthwé Eldar in the future, and in so doing kill enough of the Craftworld's population to push it beyond its ability to recover its losses. When Talos' warband of Night Lords laid waste to the Imperial colonists of the world of Tsagualsa in the Eastern Fringe, they were ambushed by Eldar of the Ulthwé Craftworld looking to again kill the Soul Hunter before he could become a threat to their race. In the ensuing battle, nearly every member of Talos' warband was slain and he himself became embroiled in a desperate single combat against the deadly Phoenix Lord who had led the Ulthwé Aspect Warriors. In the ensuing battle, Jain Zar took grievous injuries and Talos sacrificed himself by detonating a grenade, mortally wounding the Eldar Exarch; the entombed former Captain Malcharion would finish her off, ending her hunt. However, given that Exarchs can be reborn in new bodies[6a], she was not truly dead.

Jain Zar next appeared fighting to save Biel-Tan from Daemonic invasion and has since joined the Ynnari, taking Ynnead into herself and becoming reborn[10]. Since then no other Phoenix Lord has championed the cause of the newly risen Ynnari as has Jain Zar. She has spoken passionately about the hope fostered by Ynnead, and come to the aid of Yvraine and her followers on multiple occasions[11]. However, she went missing in the Webway during their battle against the Thousand Sons.[10] She reappeared during the Psychic Awakening to protect Yvraine, first from Drazhar on during the Raid on Saim-Hann then later on Iathglas from Shalaxi Helbane.[13]

After the Raid on Saim-Hann Jain Zar she went to pursue the retreating troops of Drazhar to the Webway. The journey led them to the Aelindrach - a mysterious region of Commorragh, the part of Shaa-Dom sub-city. There Drazhar made an ambush to Jain Zar and her Howling Banshees killing them all and cutting Jain Zar in half. Drazhar believed that if the armour of Jain Zar stays in the tainted Aelindrach she can never be reborn. This was not the case when Yvraine herself feeling that great Jain Zar was slain asked Ynnead grace to give Zar a new life. So one of the Jain Zar Banshees - Exarch Quitui'yenh was ressurected donning then armour and the mask of Jain Zar and melting her own mind with the Jain Zar's composite animus. Reborned anew, Jain Zar killed a lot of dark denizens of Aelindrach and activated an ancient portal that led to the Craftworld of Zandros. Appearing there she met Yvraine and her Ynnari. Not much later Drazhar also arrived at the Zandros learning that Zar is alive. In epic battle, in some kind resembling the Battle on Zandros from ancient times when Phoenix Lords Arhra and Karandras clashed here in a deadly battle, Jain Zar managed to kill Drazhar because at that moment she contained not only the power of the Phoenix Lord, but also the might of Ynnead.[14]

Jain Zar is the most active of all the Phoenix Lords in the war against the forces of Chaos. She has led hundreds of Howling Banshees to war on countless occasions, even mustering them from multiple Craftworlds at once.[1]

Jainas Mor, or Silent Death, is a three-bladed throwing weapon, tempered within the warp itself. It is wreathed in black fire and is sharper than any mortal blade. It always returns to Jain Zar and never harms her, despite its deadliness[1][2][3].

Zhai Morenn, or the Blade of Destruction, is a light, curved blade forged thousands of years ago before the Fall and shimmers with power. It is light and is wielded with dizzying speed[1][2][3].

Terror's Lament was the first Banshee Mask produced and all others have been copies. It is similar in its workings, however, it is much more potent[1].

In the Second Edition rules she carried a modified version of the Banshee Mask, known as the Mask of Jain Zar[1]. In the Third Edition she is armed with a Banshee Mask, Executioner and Jainas Mor[2].