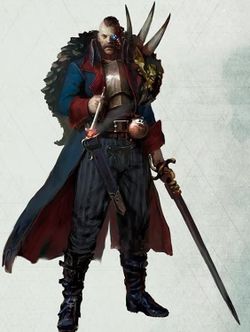 Janus Draik is a Rogue Trader, renowned duelist, diplomat,[1] Xenologist[4], and captain of the Draikstar.[2a][2b]

Draik has pushed forward the Imperium's boundaries in the Segmentum Pacificus for decades.[1] Exploring the unchartered regions outside Imperial Space, he searches for rare commodities to sell to Humanity's ruling elite.[2c] His preferred method of acquiring new worlds involves appealing to the interests of their greedy and self-important rulers by plying them with exotic riches and aged amasec aboard his opulent shuttle,[1] Vanguard.[2a]

Janus Draik was born to House Draik, an Imperial Noble House located on Terra. Growing up in sight of the Imperial Palace[5a], he is the son of Coronis Draik.[4d] After slaying a Navigator of House Numa in an honor duel over libelous rumors regarding his sister Thalia Draik, Draik was banished from his house and exiled from Terra. He has since traveled the Galaxy as a Rogue Trader.[5c]

Spurred on by the rumours of a new Blackstone Fortress appearing in the borders of the Galaxy in the aftermath of the Great Rift, Janus Draik procured copies of the Liber Monumenta and Ravensburg's Treatise on the Gothic War, amongst other less reputable works. Intrigued by his findings, he set course for the Western Reaches of Segmentum Pacificus.[2d][2c] There, he learned of the location of the Blackstone Fortress through parlance with various scavenger factions,[2a] resting at the heart of a nebula with no known warp routes or webway spars,[2c] littered for millions of miles in each direction by the debris of ancient warships and fragmented battle stations.

Abandoning the Draikstar in favour of Vanguard's nimbler manoeuvrability, Janus made the approach to Precipice – a small way station under the shadow of the Blackstone Fortress. Having had to leave the vast majority of his personnel behind to guard the Draikstar,[2a] and having glimpsed archeotech taken from the Blackstone Fortress,[2b] Janus formed compacts with some of the denizens of Precipice, learning through the costly acquisition of previous explorers' findings from the local traders that the fortress's small maglev chambers and ever-changing architecture make smaller parties the only viable way of effectively exploring the space station.[2e] Janus hopes to unlock the terrifying power of the Blackstone Fortress and claim it for Mankind. At the same time, he intends to secure a bounty of archeotech from the space station that he can sell on or use in future pursuits.[2f]

After entering the Blackstone Fortress with his party, the group encountered both Eldar, Dark Eldar, and Ur-Ghuls.[5b] Seeking the Ascuris Vault which was said to hold the Ecclesiarchy relic known as the Eye of Herminus[5a]. However it soon became apparent that the Rogue Psyker Glutt discovered aboard the Fortress was possessed by the Daemon known as Fluxus[5b], and that the Blackstone Fortress' intelligence was aiding Draik out of a desire that the Rogue Trader would purge it from the structure. The Daemon was only stopped thanks to his Navigator Helmont Corval, revealed to his old foe Numas in disguise[5g] At the end of the adventure Draik decided to stay aboard the Precipice and conduct further expeditions into the Fortress rather than abide by his orders by his House to go to the Curensis Cluster.[5h]

Continuing his exploration of the Fortress, Draik and his entourage next dealt with the rampaging weapon Isha's Lament after it was loosed into the Precipice.[6a] Draik and his allies were successful in deactivating the weapon.[6b] 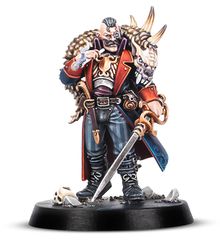