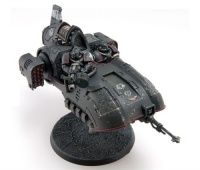 The Javelin Attack Speeder was an Imperial anti-grav fast attack vehicle used by the Legiones Astartes during the Horus Heresy.

Larger and more heavily armored than the common pattern of Land Speeder, the Javelin is an irreplaceable relic and the ability to manufacture the craft as of M41 has been lost. Its advanced gravitic nullification allowed it to mount an array of heavy weaponry more akin to a tank destroyer than a nimble Land Speeder, allowing them to make pinpoint strikes on enemy armor or infantry with devastating Lascannon or Missile barrages. Those Chapters of Space Marines who date back to the days of the Heresy may still possess a few Javelins if they are fortunate enough.[1]

The Javelin is armed as standard with a twin-linked lascannon. This may be replaced by a type of Cyclone Missile Launcher (a forerunner of the the same system carried now by Space Marines in Terminator Armour).[2]

A variant of the Javelin, the Kyzagan Assault Speeder, was developed by the White Scars.