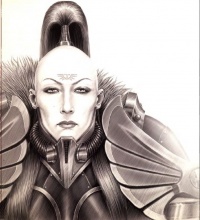 Jenetia Krole at the time of the Battle of Prospero

Jenetia Krole (sometimes spelled Jenetta Krole[1c]), also known as the Soulless Queen of the Imperium, was the Knight-Commander of the Silent Sisterhood and Chief Investigatus-Militant of the Divisio Astra Telepathica during the Great Crusade and Horus Heresy. She led the Silent Sisterhood during the Battle of Prospero[2] and the War Within the Webway.[1c][3a] 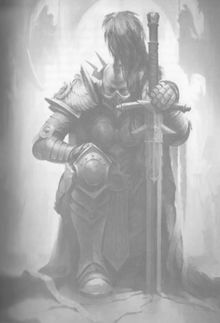 Older than she appeared by the time of the Heresy, Krole was born on Terra. The hollow girl was discovered in Albia by Constantin Valdor and eventually taken before the Emperor, giving her purpose in life. During the Unification Wars she compiled a staggering array of battle honours in the Wars of Succession, Red Frost, the harnessing of Albia, the Pacific, and Last Unity.[5a]

In the early years of the Great Crusade, Krole participated in Compliance 9-13 and the Cataclysm of Pentacanaes.[5a] No more than four decades into the Crusade, the Silent Sisterhood was formed[4a] and Krole appointed its Knight-Commander, charged by the Emperor of Mankind with overseeing the 'Great Tithe' of psykers.[4b]

At some point in the Crusade, Krole was attached to an expeditionary force engaged in the war for the Mournful Gate against Eldar slavers. When the commanders were assassinated, she assumed command by executing the remaining general staff and subordinate officers. Under her leadership, the militia won a victory that earned her the right to wear the Laurels Invictarus (laurels of victory) of a lauded general.[4b]

Krole's later Crusade battle honours included Skagan, where the first Psy-Titan of the Ordo Sinister was deployed, Itria, the Witch Wars, and Asmodex.[5a]

When the Emperor decreed that Magnus the Red was to be censured, Krole commanded the forces of the Silent Sisterhood that accompanied the Censure Host to Prospero. She personally divided her forces into protectorate detachments for the rest of the host to provide them with protection against psychic attack from the Thousand Sons. During the Battle of Prospero, she sought out and killed many of the Thousand Sons' greatest sorcerers in single combat,[4b] as well as confronting the daemon that had been manipulating Kasper Hawser.[2]

Krole returned to Terra to lead the forces of the Silent Sisterhood in the War Within the Webway. She took joint command of Imperial forces in Calastar alongside with Tribunes Jasaric, Kadai Vilaccan, and Ra Endymion of the Legio Custodes. By the later stages of the war, her mouth was permanently concealed behind a mouthpiece surgically bonded to her jaw and cheekbones.[3a] She survived the retreat from Calastar to return to the Imperial Palace, losing three fingers on her left hand in the battle.[3b]

During the Siege of Terra, Krole took part in the defense of the doomed Eternity Wall Spaceport, displaying the ability to not only appear near-invisible to Daemons but also that of standard Humans.[5c] During the battle she saved Army trooper Ollanius Piers from a World Eater.[5c] As the port fell, Krole slew many World Eaters but was confronted by Captain Kharn, now swelling with the powers of Khorne. She engaged him in battle, but was slain by the berserk World Eater, who was not certain what he had just slain due to Krole's near-invisibility.[5d]

Jenetia Krole had red-dyed hair bound in a topknot that reached to the base of her spine. She wore silver Artificer Armour and a fur-edged enhanced Voidsheen Cloak. Her weapons were the two-handed Execution Blade Veracity, a gift once wielded by the Emperor of Mankind,[3a] an Archaeotech Pistol older than the Imperium, the aeldari sabre Mortale, and a dagger named No Man's Hand.[5b]

Krole was sometimes accompanied by a Proloquor (Speaker), Melpomanei.[3a] The Raptor Guard, a cadre of elite Oblivion Knights, acted as her honour guard in battle.[1a][4b] Such was her power as a blank that she could be barely seen by even standard Humans and Space Marines.[5a]