Currently a bastion of Chaos, several other threats have also set their eyes on the Reach. The Tyranid Hive Fleet Dagon is encroaching into the region from the north-east. In the south, the Tau have colonised several worlds. Since 777.M41 the Imperium has been pursuing the Achilus Crusade, also known as the "Dead Crusade". The troops and fleets involved in the Crusade are from the Segmentum Obscurus and use a warp gate to travel to the area, which would otherwise take years of travel in the Warp to surmount any decent offensive.[1b] 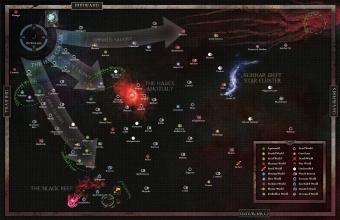 The Jericho Reach was once called the Jericho Sector, before years of neglect by the Imperium left the sector to fall into decay and eventually into the hands of Chaos. For thousands of years, Chaos has been left to fester in the once rich Imperial worlds, observed only by silent posts manned by the Deathwatch.3a

Position in the Galaxy