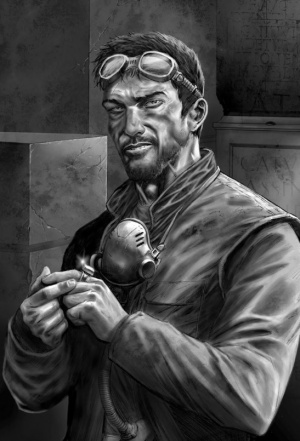 John Grammaticus was an enigmatic human psyker who served as an agent of a xenos organization known as the Cabal in the latter days of the Great Crusade. Among the powers he wielded was the ability to understand and speak any language and identify where a speaker came from based on how they spoke; he claimed there was not a language that he could not master.[1a]

Grammaticus had been an officer of the Caucasian Levvies, a great army that had served under the Emperor during the Unification Wars on Terra. During a victory ceremony after defeating the forces of the Panpacific Empire, Grammaticus briefly met the Emperor, who recognized his psyker abilities and offered to speak further to "consider the options available to beings like us."[1b] Before they could have that meeting, Grammaticus was killed at Anatol Hive. The eldar Autarch Slau Dha brought Grammaticus back to life, gave him the ability to reincarnate as a Perpetual, and put him into service in the Cabal.[1c] At one point, Grammaticus spent eighteen years in an insane asylum[2a].

A thousand years later, on the eve of the Heresy, the Cabal dispatched Grammaticus to suborn the Astartes Alpha Legion to their cause. The Cabal had foreseen the treason of Horus and the impending civil war that would result, and believed that the Alpha Legion and its primarch Alpharius had a great part to play in that coming war. To that end, Grammaticus infiltrated the Geno Five-Two Chiliad, an army in the 670th Expedition Fleet, under the guise of intelligence officer Konig Heniker. He also borrowed identities from other dead officers in order to avert suspicion.[1d]

Eventually, he came to the notice of Alpharius, who captured and questioned him of the Cabal and its intentions.[1e] After following Grammaticus's advice to abandon the field on Nurth, which was shortly after consumed by a Black Cube, Alpharius brought his fleet to 42 Hydra Tertius, known to the Cabal as "Eolith," to meet with Grammaticus's masters. In a carefully planned deception, Alpharius used Grammaticus to turn the tables on the Cabal, so that he could meet with them from a position of strength.[1f] Grammaticus had been shown what Alpharius and his twin, Omegon, would later see: if Horus was allowed to win the Heresy, the fragment of nobility in his soul would lead to Armageddon - a bloody civil war that would wipe out mankind in two to three generations. This would also wipe out the Dark Gods as well, as they were heavily invested in humanity, thus preserving the galaxy at the cost of the human species. But if the Emperor was successful, stagnation would grip the Imperium; within ten to twenty thousand years, Chaos would consume the entire galaxy.[1g]

As the Heresy spread to Calth, John contacted a former colleague there, Oll Persson, through a dream. Trying to convince him to help, Grammaticus showed him a vision of the final battle of the Heresy, Horus standing over Sanguinius's body[2]. The Alpha Legion was set on its path to join with Horus. Believing that he had put into motion the extinction of his own species (or so he thought), Grammaticus threw himself out an airlock of a Cabal vessel, hoping that this death would be his last.[1h]

However, Grammaticus was revealed to be a Perpetual and thus survived his suicide. Eventually taking the guise of an archaeologist named Caeren Sebaton, during the Horus Heresy Grammaticus discovered the existence of the mysterious artifact known as the Fulgurite. Grammaticus set out to Traois to retrieve it for his own ends. However he had been tracked by Word Bearers led by Dark Apostle Valdrekk Elias, who had been tasked by Erebus to retrieve the same artifact. Grammaticus was only saved by the intervention of Pyre Guard Captain Artellus Numeon and his surviving Battle-Brothers, and together the two eventually managed to obtain the Fulgurite. However at this point Grammaticus betrayed Numeon, using a Digital Weapon to blind the Astartes and take the Fulgurite for himself. Grammaticus was then confronted by Elias, who put a Bolt Pistol round into Numeon and demanded the Fulgurite be handed over to him so that he may ascend to Daemonhood. Yet Grammaticus was again saved, this time by Erebus who himself stepped through a Warp Portal and confronted Valdrek, killing the Dark Apostle for attempting to use the Fulgurite for his own plans. Mysteriously, Erebus then instructed Grammaticus to take the Fulgurite and leave Traois, which he did unmolested. After leaving Traois, Grammaticus was again contacted by the Cabal and instructed to head to Macragge with the Fulgurite. There, he was to meet another Primarch and then use the Fulgurite to kill Vulkan. The Cabal promised that once Grammaticus had accomplished this task, he would be free of his obligations to the Cabal forever.[3]

Shortly afterwards John travelled to Macragge with fellow Perpetual Damon Prytanis, where the duo planned to assassinate Vulkan. During a brief period when he was alone John was contacted by Eldrad Ulthran, who was revealed to be the mysterious voice he had heard on Traoris[3]. Ulthran revealed to John that he opposed the Cabal's aims and that their belief that Horus would usher in Chaos's ultimate demise was not set in stone. He believed that humanity were meant to be the firebreak against Chaos, and that without them the Eldar would fall and the galaxy shortly afterwards. He offered John a way to leave the Cabal and a chance to stop being a traitor to his own race, as John had begun to consider himself. Re-joining with Damon the Perpetuals joined forces with Barthusa Narek who had tracked John to Ultramar to take back the Fulgurite, instead he agreed to allow them to kill Vulkan with it if they would give it to him afterwards so that he might kill Lorgar. During the crisis that followed the trio interrupted the fight between Konrad Curze and Vulkan with the intent of ending him. Deciding at the last moment to side with his own race John used the Fulgurite to heal Vulkan of the madness that had consumed him, though it left him in a death-like coma and reduced John from Perpetual to an ordinary mortal.[4]

John later woke up on an unknown Craftworld being tended to by Eldar. Damon informed him of his new mortal status and that his next death would be permanent, and that the Cabal had one final mission for him. And a way of ensuring that he would do it.[4]

John was effectively taken prisoner by Damon Prytanis, held in an Eldar facility that created illusions to resemble a farm. However the facility was eventually infiltrated by Eldrad Ulthran and Barthusa Narek who after a struggle slew Prytanis with a piece of Fulgurite. Eldrad asked John where Ollanius Persson was, to which the psyker answered that he did not know. The Farseer and Narek then took Grammaticus and stepped into a Webway Portal.[5]

Using a pair of Eldar scissors that could cut through space and time that were given to him by Eldrad[7], John Grammaticus appeared near the ruins of Ababa Hive on Terra during the Siege.[6] He made his way across the devastated world, eventually reaching Guelb in Mauritania. This was the home of the powerful Perpetual Erda, who was at first dismissive of John and his goal of reaching the interior of the Imperial Palace. John knew he could not defeat Horus, but thought he could save Humanity by reaching the Emperor and stopping His ambitions. Erda was shocked to discover that John had recruited Oll Persson to his cause but told John he had not yet arrived. John became worried, as he had plan to rendevouz at Erda's home with Persson.[7] Erda later was able to determine that Persson was due to arrive at Terra two weeks from John, and gave him her Space Marine prototype protector Leetu to aid him in his quest to find Oll.[7a]

John and Leetu managed to track down John and his group of survivors from Calth to Hatay-Antakya Hive in the East Phoenician Wastes. However the group were now in the clutches of "paradise", a dream-farm of the Emperor's Children. After attempting to commune with Oll psychically for a time, John and Leetu found themselves trapped within the Emperor's Children domain as well.[8a] Within the dream-realm, John witnessed Oll's memory and learned of his past as the Emperor's Warmaster in Terra's ancient history.[8b] Ultimately, the group were aided by Actaea and a Space Marine identifying himself as Alpharius. John plead with Oll to not accept their aid, stating Actaea wreaked of Chaos. However John decided to let the new duo accompany them on their quest.[8c]