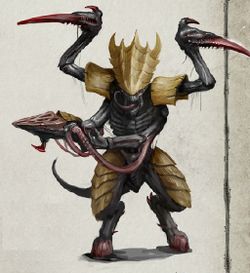 Hive Fleet Jormungandr is a small Tyranid Hive Fleet that entered the Imperium from the North East of the Ultima Segmentum[1]. This Hive Fleet specialized in ambush and tunneling tactics.[5] It was largely destroyed by Admiral Vortigern Hanroth at the Battle of the Black Nebula in late 995.M41, though remnants still endure.[5]

Jormungandr did not begin as a particularly large Hive Fleet, but swiftly accumulated a massive pool of biomass by preying upon unprotected worlds. Hive Fleet Jormungandr spread out around the Thalassi Sector like some monstrous serpent and, less than two years after its first recorded attack, had effectively sealed off the entire sector. In the three months that followed, Jormungandr remained slowly twisting in space, defending itself when attacked, but otherwise content to be left alone. Then, suddenly and without warning, the coils of Jormungandr began to constrict.

Jormungandr favoured subtler methods than the siege tactics displayed by the other Hive Fleets. Its bio-vessels rarely entered planetary orbit. Instead, Jormungandr snared asteroids and other space debris, hurling them at the target world and launching Mycetic Spores in concert. The devastation wreaked by the bombardment ensured that a greater proportion of the Spores make planet-fall. Each Mycetic Spore that landed unleashed a Ravener brood, or sometimes a Mawloc or Trygon. These immediately buried underground and went dormant to avoid detection. Only when the infestation reached critical mass did the Hive Fleet send the psychic stimuli to awaken its slumbering serpents, timing the resultant planet-wide destruction with the arrival of its Hive Ships in orbit. The Hive Ships would then deliver Genestealers and Carnifexes to the surface to escalate the havoc. 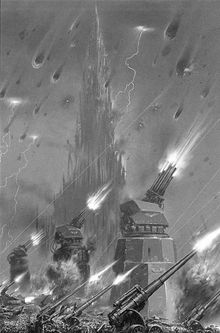 Should the invasion be defeated the threat is still not over, as Jormungandr's Tyranids will simply go to ground in the tunnel network their burrowing has created. Once ensconced, the Hive Fleet is almost impossible to dislodge. It may take a few months, or several years, but Jormungandr will rise again to attempt to claim the infested world once more.[5]

Another tactic used by the Hive Fleet, is to use asteroids as armour for its Bio-ships, which also serves as camouflage that allows the Bio-ships to launch ambushes. Recently several reports have reached the Imperium, of Jormungandr's Bio-ships embedding themselves in drifting comets as well.[5]

During the war to stop the Hive Fleet, many Space Marine forces are deployed. Blood Angels Captain Tycho leads forces to several crucial victories, but they are so reckless that many Sanguinary Priests begin to fear for his sanity.[4]

Jormungandr's vanguard was wiped out at Goyan Valley by Commander Chenkov leading over a million Guardsmen of the Valhallan 18th 'Tundra Wolves'.[3]

The greatest site of resistance was the Hive World of Sephrax. There, the planet militia and loyalists from the Crimson Castellans Space Marines were embroiled in a war with a pirate warband fronted by renegade elements from the same Chapter. When Jormungandr descended upon the world, both factions united to combat the Tyranids. They managed to significantly slow Jormungandr's assimilation of Sephrax, but despite their efforts, there was little more they could do. Mawlocs gnawed through Sephrax, shattering the foundations of hive cities and fortresses. Billions perished, the loyalists' Crimson Castellan leader Sojai Antiro amongst them. The renegades' leader, Bloodspite, wisely fled to his orbiting asteroid lair, which was swallowed whole by an enormous Hive Ship.[Needs Citation]

Jormungandr appeared in the skies above Gedron II, and hurled thousands of meteors into its atmosphere. The vast redoubt fortresses that protected the planet’s hive cities destroy many of these rocks. The remainder fell into the ocean. Jormungandr’s bio-ships retreated, and Gedron II’s governor declared the invasion over. Several months later, hosts of many-limbed Tyranid creatures burst into the lower halls of Gedron II’s fortifications, slaughtering all in their path. As planetary defence forces scrambled to react, long range scans picked up a colossal body of vessels entering orbit.[5]

Battlefleet Gammek responded to a garbled distress call from Sarposia. Its ships emerged from the warp amidst the ruins of the planet’s vast orbital shipyards, but there was no sign of Tyranid vessels, only scores of large asteroids and scattered debris. It was only when the fleet drifted into the asteroid field that tacticae officers reported movement from within the clusters of rock. Glistening, molluscoid vessels had been using the asteroids as protective shells and they launched a blistering assault upon Battlefleet Gammek. Caught in a storm of biological missiles and hurled meteoroids, not a single Imperial ship escaped the ambush.[5]

On the Forge World Megyre, the garrison Imperial Guard regiments defended their sacred manufactorum complexes with all the weird and arcane weaponry at their disposal. Massive force pylons were erected to keep the swarm at bay, but the Tyranids burrowed through the armour-plated crust of Megyre to destroy them from below. The swarm continued to weather everything the defenders threw at it, including fearsome thermal cannons, pulverizer whips, shatterstorm rifles, and all manner of experimental and blessed weapons. Megyre's last hope, the mighty Titans of the Legio Annihilator, managed to win a brief victory, until Jormungandr disgorged a new threat - a gargantuan creature that resembled a Trygon, but the size of a Reaver Titan and a fanged maw dripping with acidic venom. The creature tore a ruinous path through the Legio Annihilator, darting through the torrent of fire aimed its way with impossible ease. Only the massive cannons of the Basilica Mechanicus could bring it down; but the beast's death throes tore down great chunks of the Basilica's walls, allowing floods of Raveners into the complex and sealing Megyre's fate.[Needs Citation]

The Battle of the Black Nebula

Admiral Vortigern Hanroth assembled a great fleet, boasting not only the finest ships that the dockyards of Bakka and Sodremund could provide, but also Space Marine Battle Barges and a loose alliance of vessels from smaller worlds. These vessels included Vassalian Slavebirds, Cimmeriac Shadowcruisers, Donorathi Thunderprows, reportedly a pair of Demiurg commerce vessels, and a few ships of a kind not seen since the ruin of Golgotha. Jormungandr was bloated with biomatter stolen from its conquests, and was united in a single purpose; while Hanroth's fleet was a fractious conglomeration of vessels ill-inclined to cooperate. But the Imperial Fleet at the core of Hanroth's force was as disciplined and experienced as any in the Imperium. Hanroth himself led his fleet into the heart of the swarm from the bridge of the Grand Cruiser Crusade. Telepathica officers located crucial node-ships in the Hive Mind's synapse web, many at the cost of their sanity, and these were blown apart by furious volleys from the Crusade and its escort vessels. Larger Hive ships were boarded by Space Marine strike teams from the Death Spectres Chapter. Little by little, Jormungandr was torn apart, but not before it had destroyed fully three-quarters of Hanroth's fleet.{[Needs Citation]

Despite its destruction, Jormungandr would have two lasting influences upon the galaxy. The first was psychological. Jormungandr's invasion pathway was considerably further to the galactic north than any previous Hive Fleet, which meant that all defenders of the galaxy would have to watch their borders, not just those on the Eastern rim. The second was far more palpable. Thousands of Jormungandr's children still slept beneath the soil of a hundred worlds, just waiting for the right moment to awaken. Even a decade later, the Imperium had only the haziest knowledge of the true scale of devastation that Jormungandr wrought.

Remnants of Jourmungandr would continue to plague the Imperium well into the Third Tyrannic War. Laying dormant since their defeat, they were stirred to life once more with the invasion of Hive Fleet Leviathan. The Imperial world of Obliterax is the worst hit, with its population eventually being consumed.[2]