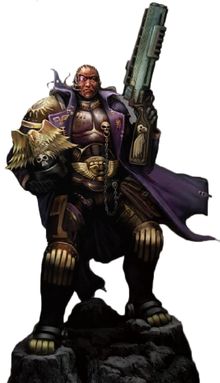 Judges are powerful figures within the Adeptus Arbites, the law-enforcement organization of the Imperium. Only the most competent and promising Arbitrators are promoted to this esteemed and powerful rank.[3b]

Cold and unforgiving and also acting as jury and executioner, their job is to enforce Imperial Law across the Imperial realm. Masters of the many legal codes and precedents within the great Book of Judgement, any individual who dares violate the Imperial Creed will meet swift and uncompromising retribution at the hands of a Judge's Bolt Pistol. However Judges care little for personal misdemeanors, leaving those matters to Planetary Governors. Rather, they concern themselves with more weighty issues such as bringing the Emperor's justice to rebels, hunting down enemies of the state, and purging Heretics. Their authority extends to within the Adeptus Terra and they are free to execute both Planetary rulers and Adepts if they are shown to be committing transgressions. On most Imperial worlds, Judges usually reside within the Hall of Judgement of an Adeptus Arbites courthouse where they monitor both the population and the planetary government.[1] Despite their infamous reputation and brutal nature, Judges are fairer than Inquisitors and will often pass judgements based on law and fairness.[3a]

Judges command their own forces of retribution, vast armies of the troops from the Adeptus Arbites spread throughout the galaxy and every vigilant to answer the call to justice. Often it is the Judges who find themselves fighting the first flames of rebellions while mobile Space Marine or Imperial Guard forces rush to support them.[1]

In battle, Arbites wear Judge Armour. This armour is broadly similar to normal Arbites Carapace Armour, but incorporates theatrical and gaudy elements which show off the power and majesty of the Adeptus Arbites.[2a]

Magistrates are experienced Judges who oversee complex and difficult cases of heresy. These legal experts have memorized not only most Imperial law but also local Sector law. Because of their expertise, Magistrates will oversee the most difficult of cases.[2b] 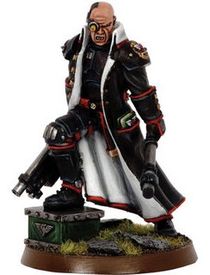