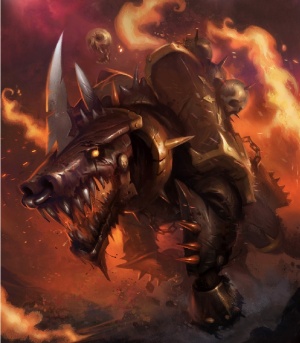 Juggernauts are the Daemonic Steeds of Khorne. These dim-witted monstrosities combine the most grueling aspects of the Blood God with the skills of his armourers and weapon-smiths.[1][2]

The Juggernaut's heavily armored, partially mechanical bodies are made of living metal and burning blood. They are said to embody the rawest moments of battle, where overwhelming force is prevalent and only the mightiest and toughest can survive.[2]

They have their pens within Khorne's realm, constantly fighting against each other and anyone who dares to approach them. Despite that, each of them has its flesh cut to form a saddle, supposed to become the steed of a mighty follower of Khorne, but only few prove mighty enough and the ground upon which the Juggernauts tread is covered with the remains of once powerful warriors. Even after mounting a Juggernaut the Daemon or warrior must go through the grueling process of breaking the beast and ensuring it obeys his commands.[3]

Those men and daemons who manage to master their chosen mount in a direct confrontation can unleash its immense power against their foes. A Juggernaut moves easily through enemy formations, smashing and crushing almost everything within its path like a living battering ram. Though they can withstand the attacks of regular infantry with ease, they are not invulnerable and anti-tank weaponry in particular has proven effective against them.[1] [2]

Mounted Bloodletters are known as Bloodcrushers.