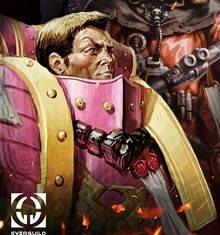 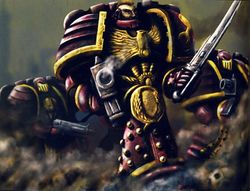 Julius Kaesoron and his Command Squad.[5]

Julius Kaesoron was the First Captain of the Emperor's Children during the Great Crusade and the Horus Heresy.

During the Cleansing of Laeran, Kaesoron accompanied his Primarch Fulgrim during an attack on a Laer temple. Kaesoron - like many who entered the temple both during and after the battle - became enraptured by the sights and sounds that permeated the place, so much so that he continuously sought out ways to stimulate his senses both on and off the battlefield. With Fulgrim's possession by a Daemon of Slaanesh, the Emperor's Children descended from a Legion that sought perfection to one that sought to satisfy their hedonistic pleasures - a stance that Kaesoron was more than willing to go with. Over time Kaesoron became obsessed with the works of Cornelius Blayke, which facilitated his fall into excess.[1a]

Just before the Battle of Isstvan III, Kaesoron accompanied Fulgrim to rendezvous with Ferrus Manus, in an attempt to sway the Iron Hands Primarch to rally to Horus' banner. When Ferrus Manus refused and was attacked (but not killed) by Fulgrim, Kaesoron struck out against his Iron Hands counterpart, Gabriel Santar, very nearly killing him with his lightning claws.[Needs Citation]

In the lull period between Isstvan III and the Drop Site Massacre, Kaesoron and the Legion attended the opening of the Maraviglia, a concert composed by remembrancer Bequa Kynska and based on the music heard in the Laer temple. The resultant symphony (which degenerated into an orgy of deviant sex and mindless killing) enthralled Kaesoron and his fellows, fuelling their desire for sensual stimulation, just before things came to a head at the Drop Site Massacre. Screaming like a madman and leaping nimbly around the battlefield, Kaesoron once again confronted the Iron Hands' first captain. In a battle that left both men in agony (actually, in Kaesoron's case, a state of orgasmic ecstasy), Santar was killed...with Kaesoron thanking him. "That was exquisite" was the last thing Santar heard.[Needs Citation]

After that, Kaesoron participated very little in the actual fighting on Isstvan V, instead defiling the corpses of the dead and taking bits of them as trophies to wear on his armor.[1]

Following the Horus Heresy, Kaesoron ascended to the status of Daemon Prince of Slaanesh [3a] and joined Eidolon's Phoenix Conclave.[6] In M41 during the Purging of Contqual, he attempted to turn the world Shardenus into a Daemon World by opening a Warp rift on the planet,[3b] but was stopped by Clan Raukaan of the Iron Hands.[3c]