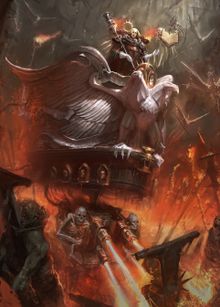 Junith Eruita is a Canoness Superior of the Order of Our Martyred Lady and is considered a hero of the Adepta Sororitas[1].

Junith Eruita is a hero renowned across the Imperium to both the faithful and heretical. Her very presence radiates faith and cause all loyal servants of the Emperor to become renewed with zeal. From her first days in the Schola Progenium Junith Eruita was observed to have a frightening intensity of faith. Her traumatic experiences had clearly scarred her for life, but not cause her to break or falther. Instead, she repurposed her hatred and range against the enemies of the Imperium. By the time she joined the Order of Our Martyred Lady, Eruita was already being watched with keen interest by its Canoness Superior Marya Somnatian. Her inspirational addresses, intensity of faith, and somewhat maniacal fondness for Flame Weapons suggested great things to come. Somnatian was not disappointed, for when Eruita took on the role of Retributor she performed with distinction.[3]

Eruita soon rose to Celestian, serving as one of Somnatian's personal bodyguards. She fought in a number of noted campaigns, such on the killing fields of Phdoro, the purge of the Nightmare Hive, and even at the gates of the City of the Poisoned King. However at the Battle of Holline's Hope Eriuta's Order came to blows with the Iron Warriors. During the battle a vaulted roof collapsed and hundreds of Sisters died, including Somnatian herself. It was then that the wounded Eruita scaled the stair leading to the miraculously untouched pulpit from which Saint Holline had once preached. Despite firing raging around her, Eruita delivered a blistering address to the surviving Sisters, causing them to launch a fanatical counterattack that scored a costly but decisive victory. Shortly thereafter Junith Eruita replaced Somnatian as the Canoness Superior of the Order of Our Martyred Lady.[3]

Junith Eruita goes to battle aboard the Pulpit of Saint Holline's Basilica and wields the Mace of Castigation.[2] 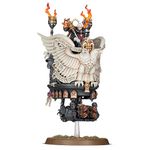