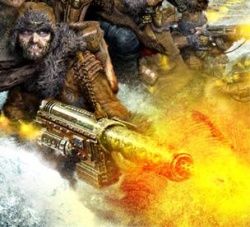 Gunner First Class Ferik Jurgen was an Imperial Guard trooper of the Valhallan Ice Warriors, and served for many decades as the personal adjutant to Commissar Ciaphas Cain. Despite his unprepossessing physical appearance, his indefatigable body odour, and general lack of basic social skills, he had several qualities which made him indispensable to Cain, most notably his fierce bravery and unwavering loyalty to Cain, the Guard, and the Emperor, his implacability under the worst of conditions (except flying), and, last but not least, his incredibly rare attributes as a Blank, which saved both Cain and several others from Daemonic and psychic attack innumerable times.

It would be no exaggeration to say that Jurgen was with Cain almost from the very start of his long career; after Cain's graduation from the Schola Progenium and his first assignment to the Valhallan 12th Field Artillery, Jurgen was the soldier assigned by the battery's commander, Colonel Mostrue, to greet Cain as he stepped off the transport on Desolatia IV. Given Jurgen's disheveled appearance, vague manner, and a body odour "which preceded him like a personal force bubble", Cain understood well that Mostrue was expressing his low opinion of the Commissariat.[1]

The two men saw little of each other in the following weeks, until Desolatia IV was attacked by a splinter of Hive Fleet Behemoth. Cain, attempting to flee the main battle, commandeered a Salamander Scout under which Jurgen happened to be taking cover. Cain ordered Jurgen to drive, and was pleased to note that the latter's natural deference to authority led him to obey without question (where a more intelligent trooper might have asked why Cain was trying to run away). But the Scout blundered onto the tyranid ground forces, and was disabled. When Jurgen was tackled by a hormagaunt, he screamed for help. At first, Cain had no intention of responding, but then saw a Hive Tyrant blocking his own path to safety, and ran back towards Jurgen, killing the hormagaunt on him with his chainsword, shortly before reinforcements from the rest of the battery arrived.[1]

Cain managed to portray his attempted flight as a reconnaissance of the battery's rear, which fortunately discovered the tyranid forces that were about to flank them. He was hailed as a hero, and Colonel Mostrue - who had his own private doubts about Cain's story - took great satisfaction in assigning him an adjutant, to befit his new status: Jurgen.[1]

The Siege of Perlia

Although Colonel Mostrue intended Jurgen's assignment as a joke, Cain quickly discovered his many useful qualities: he followed Cain's orders without question, allowing Cain to delegate many of Cain's more bureaucratic responsibilities onto him, and acted as a buffer between Cain and the several persons asking for his attention. Jurgen also had a natural talent for scrounging which allowed him - and by extension, Cain - access to almost anything in any theatre, including the choicest accommodations available in their billets.[5a]

Cain once admitted in his memoirs that a more intelligent man might have picked up on the fact that a Commissar and Hero of the Imperium was a rogue and a coward at heart, so he was grateful for Jurgen's lack of imagination.[2a]

Cain had more reason to be grateful when he and Jurgen were unexpectedly jettisoned from their ship en route to Perlia and landed behind the Ork lines in a saviour pod. In addition to his self-appointed role as Cain's driver and bodyguard, Jurgen - like any good Valhallan - was semi-literate in Orkish glyphs and language, and the closest thing Cain had to an expert in anti-Ork tactics. Jurgen acted as Cain's driver during the pair's initial flight to Prosperity Wells, and as his adjutant as stragglers from the defeated Imperial forces gradually banded around them as an ad hoc army.[5b]

During Cain's final, climactic confrontation with Warboss Korbul, Jurgen's insight was critical to saving both their lives; first, he refrained from shooting at Korbul, perceiving that the Warboss's Nob captains would not attack until the "duel" between Korbul and Cain was over; moments later, when Korbul fell dead, Jurgen urged Cain to hold his ground, having learned from his father that Orks, without a leader or a common enemy to focus on, always fell to fighting amongst themselves. He was right: when the humans refused to either run away or attack them, the Nobz began arguing, and soon the whole Waaagh! disintegrated into a bloody free-for-all, allowing Cain's force to make their way to the Imperial lines in relative safety.[5c]

Remarkably - but somewhat unsurprisingly - in all of the propagandist literature pertaining to Cain's heroism during the Siege, Jurgen is not mentioned at all.[5d][5e]

Jurgen, often referred to by Commissar Cain, had an uncanny ability to fetch anything that he desired, making Cain's and Jurgen's lives more comfortable while serving with the Valhallan 597th Ice Warriors Regiment. He also almost always carried with him Melta Weapons. This aided them both, as written in Cain's memoirs, with tasks such as creating passageways to clearing large handfuls of enemies (to make it easier for Cain to get to safety). Jurgen was also an erratic driver of armoured vehicles (though has yet to crash one) and had a fear of flying (this being his weak point, as Cain confesses after having him vomit several times while airborne).

Jurgen remained loyally at Cain's side even after the commissar retired from active duty. Though he was well advanced in years (despite the only sign of that - due in part to his collection of skin diseases and lack of physical hygiene - being the fact that what was left of his hair had turned white decades before), his vitality and lifespan were extended by a regime of juvenat drugs courtesy of Cain's long-time friend and occasional employer, Inquisitor Amberley Vail, whose psyker had discovered Jurgen's unique gift during the battle for Gravalax decades earlier. He accompanied Cain as aide, bodyguard and driver throughout the Second Siege of Perlia, much as he had done during the first.