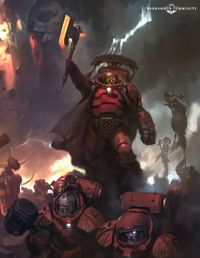 They are appointed from Leagues' most skilled and dependable warriors and the Kâhls are subordinate only to their Kindred's ruling Votannic Council. In battle, their most important role is to cast the Eye of the Ancestors over the most dangerous foes the Oathbands are facing. By doing so, the Kâhl ensure these enemies are marked out as priority targets and are the first to feel the wrath of the Kin.[1]

In battle, Kahl's are wrought in Void Armour further protected by Rampart Crests and Shield Crests. For offensive weaponry they wield a variety of armaments including Autoch-Pattern Combi-Bolters, Forgewrought Plasma Axes, Plasma Blade, a Volkanite Disintegrator, and a Mass Gauntlet.[4]

Kâhls that have been promoted to their League's Votannic Council, are known as High Kâhls and lead an entire Kindred. These old warriors have fought in countless wars, and have witnessed first-hand much of the worst the galaxy has to offer. They are able to appraise the battlefield situation at a glance, and from bitter experience can select priority targets with pragmatic efficiency while directing their Kin in war. While the Leagues' Oathbands are normally led by a Kâhl, a High Kâhl may command one, while also having a Kâhl serving beneath them.[3]

The term Kâhl might be inspired by interrelated terms of Norse origin such as housecarl or húskarl, Churl etc.