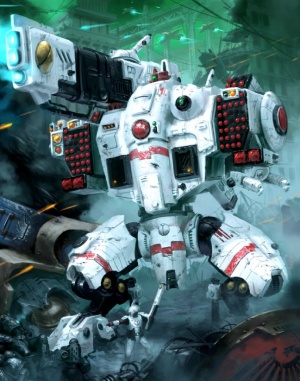 The KV128 Stormsurge is a type of heavy Tau Battlesuit.[3]

The Stormsurge is a heavy weapons platform designed to serve as the Tau Empire's Titan killer, created by Earth Caste engineer O'Ishu'ron after Tau forces were frequently being outmatched by Imperial Titans and Super-Heavy Tanks. The KV128 was the first of the Tau's new generation of heavy artillery assets known as Ballistic Suits. Less maneuverable than a Riptide, such is the power of the Stormsurge's weapons that the suit is equipped with thrusters and retractable ground anchors to counter recoil. In truth, the Stormsurge is more of a walking tank than a true Battlesuit. Unusually for a Tau battlesuit, the Stormsurge has two crew instead of one.[1][2] It is operated by a selected pairing of veteran Hammerhead crewmen, who have graduated in the ballistic suit academies on Bork’an.[3]A Shas'vre experienced in Battlesuit piloting controls the suit itself, while a Ves'oni'Vash graduate controls the weapons systems. It is said that crewing a Stormsurge is less prestigious then a standard Battlesuit.[1][2] The Shas'vre wears a hair braid to signify his rank.[2]

The Stormsurge's primary weapon consists of either a Pulse Driver Cannon or Pulse ARC Cannon but it bristles with numerous secondary weapons systems that include two Cluster Rocket System pods, four Destroyer Missiles, two Airbursting Fragmentation Projectors, two Smart Missile Systems, two Burst Cannons, and twin-linked Flamers.[1] The immense power required for its weapons systems means that the Stormsurge is equipped with two slow-charge reactors. It is also used regularly as a platform to field-test experimental weapons so big and heavy they have previously only used on spaceships.[3]

The Stormsurge itself is transported into battle by specifically modified Tau Mantas.[2] 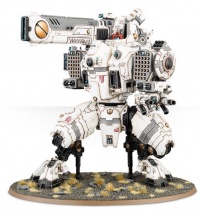