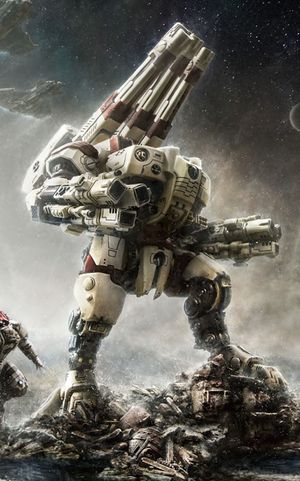 The KX139 Ta'unar Supremacy Armour is a type of super-heavy Tau Battlesuit.

The largest class of Battlesuit in the Tau inventory, it is intended to meet a threat that the Tau Empire has not yet prepared for; the defence of worlds within their growing domain from the threat of other galactic races. Designed to counter anything from Imperial Knights to monstrous Tyranid beasts, the KX139 lacks the maneuverability of other battlesuits, and is instead intended for static defence, carrying massively destructive long range weapons. Earth Caste engineer Fio’o Ke’lshan Sho’aun developed the KX139 to mount a dynamic yet stoic defence against the enemies of the Tau Empire.[1] Development began after it was found that Tau heavy flyers such as the Manta were often outclassed against heavy enemy assault elements.[3]

The KX139 bristles with weaponry, with its primary armament being a back-mounted Pulse Ordnance Multi-Driver or Nexus Missile System. Additional weaponry includes triple Ion Cannons or Fusion Eradicators on each arm and two chest-mounted stations known as the Vigilence Defence System with Burst Cannons and Missile Pods.[1] Other weapons options include a Nexus Missile Launcher or Heavy Rail Cannon with Fragmentation Cluster Shell Launcher. Protection is provided by a Barrier Shield Generator, which can withstand even Titan-class weaponry.[2][3]