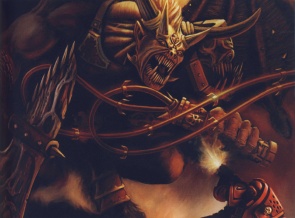 Ka'Bandha armed with the whip he used to crush Sanguinius' legs.

Ka'Bandha is a Bloodthirster of Khorne and is described as one of the mightiest of Khorne's servants.[2b]

Ka'Bandha first appeared leading Daemonic forces against the Blood Angels at the Battle of Signus Prime alongside the Keeper of Secrets Kyriss the Perverse, being summoned to the Materium by sacrificing the Word Bearer Astropath Corocoro Sahzë.[5] During the battle Ka'Bandha engaged in an airborne battle with Sanguinius and broke the Primarch's legs before unleashing the Ragefire upon the Legion and activating the dormant Red Thirst within the Legion. After Sanguinius was recovered thanks to the efforts of his Blood Angels, he engaged in a second round of fighting with Ka'Bandha and banished him back to the Warp.[5] Ka'Bandha may also have been responsible for the Black Rage afflicting the Blood Angels and their Successor Chapters to this day.[1a]

Upon his return to the Warp, the broken Ka'Bandha crawled before Khorne, met only with disgust and mockery. For his failure he was banished from Khorne's court, doomed to scavange on weak souls to survive in the Formless Wastes. Other Bloodthirsters led hunting parties to seek his skull, and in time the desperate Ka'Bandha learned to be cunning. The hunters became the hunted, and Ka'Bandha took their armor and weapons for his own. Ka'Bandha eventually returned to the Fortress of Khorne with the skulls of these defeated foes, demanding a second chance from the Blood God. Khorne agreed, ordering Ka'Bandha to harvest 500 Blood Angels souls in the presence of Sanguinius.[10]

He was later among the Greater Daemons summoned into Realspace by the Thousand Sons, during the Battle for Terra[9a]. After the Lion's Gate Spaceport fell to the Traitors, the Daemons were unleashed to destroy the Imperial Palace's Colossi Gate[9b]. While they succeeded in tearing down the Gate's outer defenses, the Daemons were destroyed by the White Scars' Stormseers and the Adeptus Custodes, before they could complete their task.[9c]

The Daemon would return to plague the Blood Angels during the Battle of Terra, where he yet again challenged Sanguinius to battle. During their duel, Ka'Bandha attacked the Primarch when his back was turned, and the Daemon quickly cast Sanguinius to the ground. But, unlike Signus Prime, this time Sanguinius rose to his feet once again, and calling upon the last of his strength, hefted the Daemon by the neck. The Primarch was eventually able to break the Bloodthirster's back with the hilt of his sword. Afterwards the Primarch hurled the Greater Daemon back into the Heretic army and finally retreated back to the safety beyond the walls of the Eternity Gate.[1b] Ka'Bandha's broken body was then consumed by weaker Khornate Daemons.[10]

In 944.M41 the Grey Knight's prognosticars predicted that Ka’Bandha would shortly return to the mortal world. Knowing Ka'Bandha to be a dangerous foe, and moreover one who had earned the bitter enmity of the Blood Angels, the Grey Knights brought this news to the attention of Commander Dante and proposed a joint strike. A combined strike force of Blood Angels and Grey Knights assailed Ka'Bandha's fortress on the Daemon world of Kalagazaar. Ka'Bandha was banished, the Daemon armies were destroyed and Kalagazaar itself subjected to Exterminatus. At the campaign's end, the surviving Blood Angels had their memories wiped - a price Dante agreed with the Grey Knights at the mission's start.[3]

In 999.M41, Ka'Bandha returned from the darkness of the Warp with a Daemon army at his command, his first blow striking against Ammonai, the outermost planet of the Baal system.[2a] He later engaged the Blood Angels in the Battle of Khartas.[2c] He next appeared during Khorne's Blood Crusade.[6]

After the Devastation of Baal, a massive effigy of Ka'Bandha's eight-pointed symbol made out of the skulls of dead Tyranids was found on Baal Prime.[6] He was later banished back to the Warp by Mortarion during the War in the Rift.[7]

It was later explained that both Ka'Bandha and An'ggrath belong to the First Host, a band of eight of the strongest Bloodthirsters of Khorne.[8]