Kaelor is an extremely isolated Craftworld of the Eldar. Under unclear circumstances, at some point in the distant past Kaelor made a webway jump to the edge of the galaxy and has not ventured back towards the galactic centre for several millennia. It has virtually no contact with the outside galaxy, and even the Harlequins barely remember its existence. Kaelor is known to pass through the Calixis Sector, a region normally avoided by the Eldar, every thousand years.[1]

The Craftworld of Kaelor remembers virtually nothing of its early history and its earliest known history begins with the Craftwars, and even information of that event is very scarce. What is known is that following a webway jump, Kaelor found itself on a collision course with Saim-Hann. The ensuing conflict supposedly ended with a Kaelorian victory, but this is highly doubtful. All that is known is that Kaelor was virtually rent apart and is now only held together through incredibly strong psychic bonds. During this time, an individual, known only as "Gwrih the Radiant", came to prominence.[1]

Gwrih united the Craftworld in an uneasy peace that has held for millennia; a single line, the Rivalin Dynasty, was chosen to hold the position of Farseer. The other "Great families" were effectively exiled from the capital city, the "Sentrium", to the outer reaches of the Craftworld. The heads of the Aspect temples are accorded far less stature on Kaelor than other Craftworlds and swore an oath to Gwrih that they would never intervene in the political struggles of the Great houses.[1] 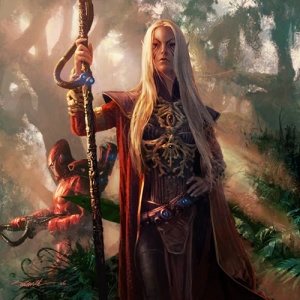 The tenuous peace that held was so long that it led to a dangerous level of unbounded indulgence and decadence among the population of the Sentrium. What would have been purged as a Chaos-influenced pleasure cult on other Craftworlds became accepted as "normal."[1]

The affluence of the Sentrium and the ever-greater deprivation of the other great houses could only have one outcome, and events finally came to a head with the House Wars.

During the House Wars, the Aspect Temples retained their customary neutrality, and thus the main opposing forces were the Guardian armies of Houses Ansgar and Teirtu. The struggle was long and bloody but the final victory went to the Teirtu; the head of House Ansgar was executed, though his heirs were spared.[1]

Following the House Wars, the Teirtu family, led by Iden Teirtu, emerged victorious, and House Ansgar was defeated and vanquished into the hinterlands of Kaelor. Iden Teirtu moved his House to the Sentrium and effectively held the Farseer under house arrest, as his son had sided with the Ansgar during the war.[1]