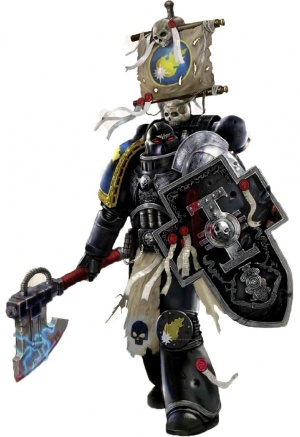 Kail Vibius is a Watch Captain of the Deathwatch.[1]

A Battle-Brother of the Marines Errant Chapter and a newcomer to the Acheros Salient, Watch Captain Vibius has a burning desire for vengeance against the xenos, which has marked him out even amongst the alien-hunting ranks of the Deathwatch. An otherwise unremarkable skirmish during the Corinth Crusade between the Marines Errant and a raiding force of Dark Eldar ended with a squad of Space Marines—Vibius amongst them—captured and taken away to the dark realm of Commorragh. Stripped of his power armour and weapons, Vibius and his Battle-Brothers were forced to do battle in savage gladiatorial contests against other slaves, xenos beasts, and Dark Eldar Wyches. More than a few of the Marines Errant did not survive these trials, but every fallen Space Marine stoked the fire of Vibius’ rage. In time, the Dark Eldar turned their attentions to newer playthings, and Vibius seized the opportunity. Stirring his fellow captives into action, the Marines Errant led a small but determined slave uprising that caught their languid Dark Eldar captors by surprise. The embattled Space Marines fought their way to freedom, and returned to the Imperium.[1]

Vibius bears a badge of honour marking him as one of the Marines Errant Chapter’s Dark Void Elite for his accomplishments, and he was swiftly nominated for the honour of representing his Chapter in the Deathwatch. Vibius impressed his commander, Watch Captain Bron of the Dark Sons Chapter, and it was not long before the Marines Errant Battle-Brother was leading his own Kill-team. When Bron was mortally wounded during a confrontation with a Slaugth Overseer in the Black Reef, he recommended that Vibius be promoted to the rank of Watch Captain, a role he has held ever since.[1]

Vibius has personally led a number of Kill-teams into battle against the Stigmartus in the region with great relish. There are many in the Deathwatch of the Jericho Reach who consider him uncommonly reckless and aggressive, particularly towards the corrupt soldiers of Cult-General Elak Sarda. Some whisper that Vibius’ unusual zeal is merely disguised pragmatism—that Vibius believes the sooner the threat of the Stigmartus is eliminated, the sooner the Watch Captain can resume his own quest for revenge against the Dark Eldar.[Needs Citation]