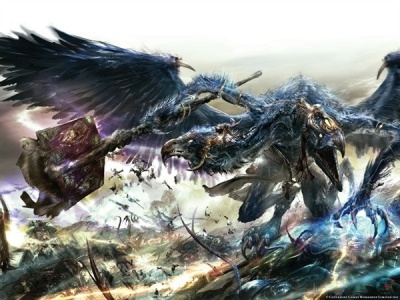 Fateweaver, the Oracle of Tzeentch originally known as Kairos, is the personal Vizir of Tzeentch - a Lord of Change capable of seeing things hidden even from the gaze of its master.[1] It is numbered among the Conclave Diabolus, the hundred and one daemons the Grey Knights consider most dangerous.[5]

Although Tzeentch could see all of the past and present, he was unable to grasp all of the uncountable threads of the future. The need to overcome this one weakness took Tzeentch to the mystic Well of Eternity at the very centre of reality, where space and time originate and end. However, even Tzeentch was afraid to enter the roiling currents of the well; so instead he sent his Lords of Change, but none of them ever returned. Finally, Tzeentch grabbed his vizir Kairos and cast him into the well. This time, Kairos survived, just. But when he resurfaced, Kairos was unnaturally aged, hunched and wizened. His mighty pinions were reduced to feeble vestigial remains, and he now had two heads. Henceforth, Kairos held both the knowledge of the future and the resulting insanity, and sits at Tzeentch's right side as his Oracle. He is constantly mumbling madly, and suddenly bursting into rambling tirades about events still to happen. Eighty-one Lords of Change are tasked with recording every word of the Oracle. A few mighty individuals, mortal and Daemon alike, are granted an audience with the Oracle for the completion of the most challenging of tasks for Tzeentch. The Oracle knows the answer to all questions; but only one head will always answer the truth, while the other simultaneously delivers a contradictory answer, which is false but equally believable. The resulting riddle invariably leaves the petitioner baffled.[1]

On the rare occasion that Tzeentch sends Kairos to the mortal battlefield, he is known as Fateweaver. He and his daemonic bodyguards are truly unstoppable, for he is able to use his great magical power and incredible prescience to influence the course of the battle. However, if any unexpected harm comes to him, Kairos often retreats back to the Warp, afraid that his treacherous master might have intentionally hid that future from him.[1]

Decades before the Horus Heresy, Fateweaver appeared before Lorgar Aurelian during his pilgrimage into the Eye of Terror and gave him a choice that would change the fate of galactic history. Using his foresight of the future he stated that Lorgar could either seek revenge against Roboute Guilliman for his shame upon Khur, but doom Chaos in the coming war, or put aside personal satisfaction and work for the Gods of Chaos and perhaps ensure their victory over the galaxy. In this single, important instance both of Fateweaver's heads spoke the same truth.[6] Later on during the actual Heresy Kairos fought Lion El'Jonson, but was impaled through the heart as the Primarch remarked that he wondered if Fateweaver saw that coming.[7]

At some point after the fall of Prospero, he was found by the Thousand Sons bound as a device known as the Iron Oculus. Magnus the Red ordered the Oculus to be brought into possession, and Ahzek Ahriman was successful in retrieving it from the Yokai. Fateweaver was then brought from the Oculus and into a Yokai under the name Aforgomon where he aided Ahriman in recovering the Shards of Magnus. During his time with Ahriman's Cabal, Aforgomon was able to manipulate Hathor Maat, desperate for salvation from the flesh change, into changing a single line of the Book of Magnus.[10]

On Nikaea, Aforgomon was finally able to manifest into his proper form through Hathor Maat due to a pact made with Ahriman. After manifesting, he aided Ahriman in confronting the shard of Magnus, and the primarch revealed that the daemon was known as "The One Who Comes at the Appointed Time" before trapping the daemon with warp power. When Ahriman found Magnus to be too powerful, the sorcerer demanded more power, which the daemon gave, and he was able to merge with a portion of Magnus to battle the other before he released the daemon. After the shards of Magnus, merged transported the Thousand Sons back to the Planet of Sorcerers and the daemon vanished.[10]