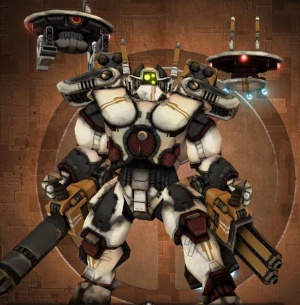 Shas'O Kais was a student of Commander Puretide. Under Puretide's tutelage, Kais became a master of the Monat ("Lone Warrior") method of combat.

In 740.M41, Shas'O Kais was dispatched with the Fire Caste alongside Tau Auxiliaries forces including the Vespid and Kroot to quell the troubles on Kronus. He was also dispatched with the Ethereal Aun'el Shi'Ores to secure and hold the capital city on Kronus. The planet was caught in a battle between the Imperium of Mankind's Imperial Guard and Blood Ravens Chapter of Astartes, the Eldar, and the Necrons. A strong yet merciful commander, O'Kais often offered his enemies multiple chances to surrender, with refusal to serve the greater good resulting in the enemy's total annihilation.[1] However, the Blood Ravens managed to drive the Tau forces off the world during the campaign.[6]

After the end of the Damocles Gulf Crusade, Shas'O Kais was put into stasis to be preserved until he was needed, and later revived, though the exact time of his revival was not recorded.[3]

During the Tau's Fourth Sphere Expansion, O'Kais was sent along with the Tau's fleet. He remained in stasis- although his stasis chamber had been somehow altered to keep his mind active. During this forced state of consciousness, Kais devised countless tactics and strategies to combat almost every foe the Tau had encountered.[5]

In 243.M42, he was deployed to a mission on Duskenwald. Using a XV95 Ghostkeel to attack an Angels of Absolution facility housing several psykers. After killing his intended targets alongside several Astartes, his battlesuit was disabled by an orbital bombardment, forcing him to flee. The data from this battle was recovered by the Tau to be used as the basis for training a force of Tau with skills similar to his.[5]

Sometime in M42 O'Kais reappeared leading the Tau against the forces of Chaos in the Kellik Plague War.[4b]

Kais wears experimental XV22 Stealth Battlesuit armour, a symilar type as Commander Shadowsun, which throughout the campaign gains a Jetpack, Advanced Sensor Array and Stealth field generator. Initially armed with only a Burst Cannon, Kais has access to a plethora of ranged weapon upgrades including Missile Pods, a Fusion Blaster and a Plasma Rifle. He can also be accompanied by various Shield drones and Gun drones.[1]

During his mission on Duskenwald, he used a XV95 Ghostkeel, armed with a Fusion Collider and twinlinked Fusion Blasters.

The name 'Shas'la T'au Kais' was also featured in the first person shooter for the PC and Playstation 2, which was later adapted into a novel: Warhammer 40,000: Fire Warrior, the protagonist being a Tau warrior first fighting the Imperium, then the forces of Chaos. However, this Kais is unrelated to Shas'O Kais, as O'Kais was a student of Commander Puretide, who died before the Damocles Gulf Crusade, while La'Kais wouldn't even finish his basic training until 200 years after the Damocles Gulf Crusade[2]

Upon uniting with the Tau forces of the Fifth Sphere Expansion, Shas'O Tash'var Shi Kais was subject to the ritual of Malk'la for atrocities committed against non-Tau races.[7] Note: this "Shas'O Kais"'s sept is Tash'var, while "The Living Weapon" is shown wearing the colours of T'au.