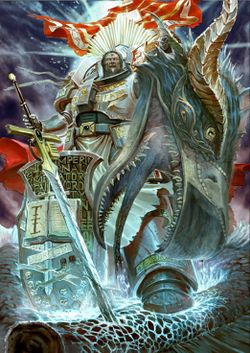 Kaldor Draigo is the 48th[3] and current Supreme Grand Master of the Grey Knights. He wields the legendary Titansword.[4]

As a simple Battle-Brother of the 3rd Brotherhood, Draigo banished the Daemon Prince M'kar the Reborn on Acralem.[2a]

In 901.M41, during the Battle of Kornovin, Draigo would become Supreme Grand Master of the Grey Knights after the Daemon Prince Mortarion killed his predecessor, Geronitan along with many other Grey Knights who attempted to banish the fallen hero. The act made Draigo fly into a rage, assaulting the weakened Daemon Primarch. He was only able to defeat Mortarion by uttering the true name the Emperor had originally intended for him. The Primarch's body was shattered by this and Draigo carved his predecessor's name into his heart - an insult Mortarion has never forgotten, as his spirit is now recuperating in the Immaterium), where he prepares to kill Draigo once and for all.[2b][3].

However, after a second confrontation with M'kar on Acralem,[2a] Draigo has been cursed to a life trapped within the Warp, doomed to walk within the Realm of Chaos itself. To remain pure while constantly assailed by Chaos shows fortitude and personal strength that is beyond measure. He has undertaken many great exploits within the Warp: slaying the great Bloodthirster Kar'Voth, setting fire to the jungles of Nurgle's domain, defeating the six chosen Daemonettes of Slaanesh, the Six Sisters, and destroying the fortress of the Lord of Change M'Kachan.[2c] He also appeared to battle alongside the Dark Angels in the Pandorax Campaign. But while Draigo lives, he will prevail and one day, he will return.[1] In 999.M41, Draigo returned alone to Acralem to free it from M'kar, hoping to end the Chapter's ancient feud with the Daemon.[4]

After the formation of the Great Rift, Draigo discovered that he could now return to the material realm for greater periods of time. The Grey Knights Prognosticars believe that his presence is now linked to Mortarion due to the ties of hatred that bind the two. Draigo later appeared to each of the Grand Masters of the Chapter and asked for their counsel, and due to the dire state of the Imperium the Terminus Decree is given consideration.[5]

During the Assault on Sortiarius, Draigo reappeared to help guide the Imperial forces.[6] 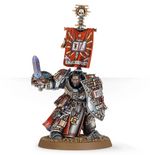