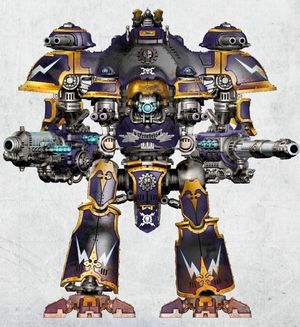 Kalena Maxus in her Knight Stormwalker[1]

Kalena Maxus was a Knight in one of Kamador's Knight Houses, until the creation of the Great Rift, which engulfed her Homeworld in the maelstrom of the Warp. Unfortunately being so firmly in the grasp of the giant Warp Storm, made the Knight World a target for the Emperor's Children, who invaded Kamador at the head of a large horde of Chaos forces. Despite the valiant efforts of its Knight Houses, Kamador was overrun and it was then that High King Arturo, gave Maxus a final mission to undergo: he ordered Maxus to spread the word of her Kamador's fall, and to exact revenge unending upon the forces of Chaos for their murderous deeds. Though Maxus did not want to flee, she followed her High King's orders and escaped with her Knight Castellan, shortly before Kamador's Knight Houses were destroyed and her Homeworld fell to the Chaos invaders. Now known as the Stormwalker, Maxus has taken the Freeblade oath and haunts the fringes of the Great Rift, rallying Imperial forces wherever she finds them and leading them to fight back against the forces of Chaos. The arrival of the Stormwalker has turned the tide of many battles and Lady Maxus dedicates each hard-won victory to the memory of her slain kinsmen.[1]