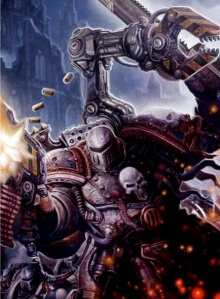 Kalkator was an Iron Warriors Warsmith who took part in the Horus Heresy, as well as the battle known as the Iron Cage, against the Imperial Fists.

By 544.M32 Kalkator still continued to plague the Imperium and led a Grand Company from the world Klostra, near the Maelstrom. However, his forces were nearly destroyed in the War of the Beast, when an Ork Attack Moon suddenly appeared in Klostra's orbit. It soon launched a massive Ork horde, that overwhelmed the Iron Warriors and the Human colonists, who lived on Klostra and worshiped the Warsmith and his Grand Company. Faced with their destruction, Kalkator and what remained of his Grand Company were forced to constantly retreat from the Orks; until their Vox picked up transmissions from their Strike Cruisers, Palimodes and Scythe of Schravaan in Klostra's orbit. The two ships were now all what remained of Kalkator's fleet and they had only survived, due to being stationed at the Grand Company's outpost in the Ostrom System. The Warsmith did not know why they had returned to Klostra, nor cared, and immediately ordered the Strike Cruisers' Commanders to extract the Grand Company from Klostra, before they were destroyed.[1]

Though they faced heavy fire and the loss of several of their Thunderhawks, the Grand Company was able to be evacuated; only to see the Scythe of Schravaan be destroyed by the Orks. The Thunderhawks were then forced to land upon the Palimodes, as it began to retreat from the Attack Moon and once he was board Kalkator took command of the Strike Cruiser from its Commander Attonax. He soon ordered the Strike Cruiser to head to their outpost in the Ostrom System - only to be told by Attonax that it had fallen. Not to The Beast's Orks, as he had expected, but to a Black Templars Crusade; which was why the Strike Cruisers had returned to Klostra. Faced with having suffered significant losses to his Grand Company, and nearly everything they had possessed, Kalkator gave the order to begin a Warp Jump. When asked what their destination was, the Warsmith did not say and only replied with, "We can't fight them both."[1]

Kalkator's forces later became trapped on the world of Dzelenic IV, assailed by the Orks and Black Templars under his old enemy Magneric. In the face of mutual annihilation by the Greenskins, Kalkator was able to negotiate a tense truce with the Templars and the two agreed to temporarily fight side by side.[2] Subsequently, Kalkator and his forces entered into an alliance with Fists Exemplar under First Captain Zerberyn, battling together on the Iron Warriors Fortress World of Prax.[3]

When Kalkator and his allies learned that The Beast had been defeated, Zerberyn led a rendezvous with the Black Templar and attempted to explain that the Iron Warriors be allowed to leave in peace due to their contributions to the war effort. However the Black Templars led by High Marshal Bohemond would have none of it, and many of the Fists Exemplar brethren rebelled as well at the prospect of opposing the Imperium. In a subsequent battle with the Black Templars, Zerberyn was faced with killing either Bohemond or Kalkator and ultimately chose the former. With no other choice left, Zerberyn knelt before Kalkator and pledged himself to the Iron Warrior's Grand Company.[4]