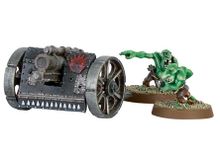 The Kannon is a classification of a general type of Ork artillery weapon.[1]

The Kannon is the most common Ork artillery piece, a heavy gun frequently mounted on Ork vehicles, from Gun Trukks to Battle Fortresses or simply used as Big Guns. It is often considered a great joke among Kannon crews to feign a dud shell in the kannon and make one of their fellow members retrieve it. Woe betide the unlucky Grot called in to retrieve such a "dud", as his crew members will invariably proceed to fire the gun with him half-inside. This leads to death, dismemberment, decapitation, broken Kannons, bloody lower bodies of Grots whole only from the waist down found near Kannon muzzles, or to the unnaturally fortunate Gretchin, at the very least a prompt deafening. Kannons fire two types of ammunition:[1][2]