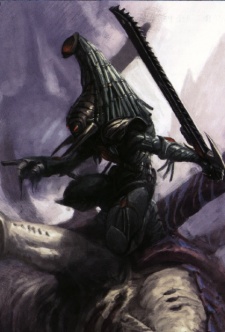 Karandras (translation, "The Shadow Hunter") is the Eldar Phoenix Lord of the Striking Scorpions Aspect.

Karandras is the most shadowy and mysterious of the Phoenix Lords as no one knows where his shrine originally lay, though it is thought to be one of the smaller Craftworlds that survived The Fall but were destroyed soon after. Karandras is also not the first Exarch of the Striking Scorpions, as that honour belongs to Arhra, the Father of Scorpions. However, Arhra fell to darkness and betrayed the other Phoenix Lords, leading daemons in an attack on the Shrine of Asur. Arhra would flee into the Webway becoming forever known as "the Fallen Phoenix that burns with the light of Chaos." Karandras, the greatest pupil of Arhra, took his master's place after a brutal seventeen day duel with him and tempered his murderous nature with the patience of a hunter, using his new teachings to found Aspect Shrines on many Craftworlds.[1][2][3][4a]

Karandras is the ultimate stealth warrior, able to draw the very shadows around himself and kill his prey with claw and blade before they were ever aware of his presence. He carries the Scorpion's Claw Arhra's Bane and Scorpion Chainsword, the Biting Blade Isirmathil, and Plasma Grenades. perhaps his most potent weapon is his Mandiblaster known as the Scorpion's Bite.[3] The Mandiblasters of other Scorpions are as pinpricks compared to the Scorpion's Bite,[1] which is so powerful it can shatter the Power Armour of a Space Marine and hurl him off his feet[4b] or penetrate Terminator Armour[6]

As with the other Phoenix Lords, Karandras has no permanent home and wanders across the galaxy. He was last spotted on Zandros in 928.M41 where he dueled for seventeen days with Arhra.[5] Karandras later appeared under the command of Jain Zar, now pledged to Ynnead. Karandras took part in the battle to defend the Ynnari against the Thousand Sons and Tzeentch Daemons in the Webway, vanishing during the struggle.[8]