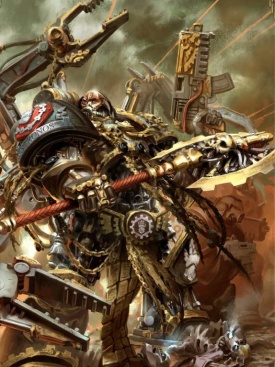 Kardan Stronos is an Iron Father of the Iron Hands Space Marines Chapter who serves as its current elected Chapter Master.[8]

Kardan Stronos was originally a Space Marine of Clan Vurgaan, however he was transferred to Clan Garrsak upon him reaching the Rank of Sergeant.[6] He then went on to serve for years as Iron-Captain of Clan Garrsak before he was inducted into the Iron Hands Chaplaincy, eventually traveling to Mars for training as a Techmarine. His reverence for the Machine and hatred of weakness earned him a place on the Iron Council, and his ruthlessness and desire to succeed made him the logical choice to be the next Chapter Master of the Iron Hands, taking all power and responsibilities for campaigns involving multiple Clan-Companies and returning power back to the Clan Council at the end of the campaign. Stronos was originally elected by the Council, and as is chapter tradition can have it stripped away from him at any given time.[8] It is a testament of his skill as a leader and warrior that the Clan Council has appointed him as Commander for over three consecutive centuries. Under his leadership, the Iron Hands have destroyed Waaagh! Drezgnod and the renegade Blood Heralds, as well as purging Hive Fleet Moloch from the Regis System.[2]

During the era of the Kristosian Conclave, Stronos was among those who opposed the Kristonian faction of the Iron Hands and stressed the Chapter's humanity over the machine aspect emphasized by Kristos and his followers.[3] After the Gaudinian Heresy, where a third of the Iron Council was lost, Stronos inspired the remaining Council members to endure by reminding them that they were also men and not purely cold machines. Since then, Stronos was elected War Leader of the Iron Council and has been reelected at every opportunity since.[3]

As of 760.M41 Kardan Stronos had been on the Iron Council as de facto Chapter Master for 300 consecutive years, making him the longest serving Iron Hands leader since Primarch Ferrus Manus.[2] It was in the face of Waaagh! Grimfist that the Iron Council reappointed Stronos to lead the Chapter for the 300th consecutive year. Stronos then brutally annihilated Grimfist's Orks.[2],[5]

In 802.M41, during the Defense of Parathen City he accepted a challenge to personal combat from Varlag the Butcher, a World Eaters Champion of Chaos, decapitating him with his Axe of Medusa.[4] In 998.M41 after battling the Farsight Enclaves on Fall'yth Stronos gave up his position on the Iron Council, but was immediately reappointed by the Council in the face of the threat posed by Hive Fleet Leviathan — despite the objection of several veteran Iron Fathers.[2]

After the formation of the Great Rift, Kardan Stronos appeared on Vigilus leading eight Clan-Companies of Iron Hands and two companies of Brazen Claws in aid of their Mechanicus allies in the War of Beasts.[7]

Kardan Stronos is an firm believer in firepower and considers it the only tenet of battle. He considers Razorback assault transports to be the pinnacle of battlefield effectiveness. Like many in the Iron Hands, he is also a follower of the Cult Mechanicus and worships the Omnissiah.[1]

Stronos's desire to eradicate weakness has extended to his fellow Iron Hands. At his urging, the Clan Council has expanded to include Iron-Captains, Apothecaries, Chaplains, and other Iron Hands, broadening the collective wisdom of the Council. Stronos also believes that by suppressing their emotions, the Iron Hands are making themselves weaker, he is convinced that only by experiencing and mastering their emotions can they become the perfect Space Marines. While his actions have undoubtedly strengthened the Chapter, many other Iron Fathers view the changes he has made with caution. Stronos has long displayed difficulty mastering his own emotions, and many fear that he will suffer the same fate as their Primarch Ferrus Manus in allowing his anger to overcome his judgement.[2]

Of all the enemies the Iron Hands have faced, it is the Necrons that Kadan Stronos hates the most, viewing the soulless automatons as abominations in the eyes of the Omnissiah. When expecting to face Necron forces, Stronos will persecute the wars with the Necrons more perniciously than the Clan Council believe to be necessary.[2]