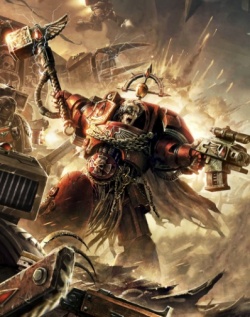 Arenos[3] Karlaen is the current Captain of the Blood Angels 1st Company.[1]

As a young battle-brother, Karlaen first displayed his tactical acumen during the war for Barestyr XIX against the Speed Freeks of Waaagh! Kruggdak. When Karlaen’s Sergeant was decapitated by an Ork kannon, he assumed command of his squad. Using the world’s sky-bridge network as a battlefield, Karlaen trapped the xenos among the bridges complex cogwork gates. Robbed of their mobility, the Orks became easy prey for the Space Marines. This action would be first of many to draw the eye of Dante. When Arenos entered the ranks of the Archangels it was as a Veteran Sergeant of a Terminator Squad.[4]

The destruction of more than half a dozen Space Hulks can be laid at Arenos’ feet. Doom of Vorgoth, Divine Purgatory and Twilight Aegis are names now synonymous with Karlaen. It was on the Doom of Vorgoth that Arenos was almost killed by the Necrogolem, a Nurgle Daemon of meat and metal. The vile creature had turned the space hulk into a playground of pestilence and disease filled with myriad traps to snare the unwary. Karlaen would eventually destroy the creature by venting its sump-palace to the void and freezing Necrogolem in a tomb of its own filth.[4]

Another Space Hulk — the Doom of Perdita — was cleansed of Tyranids by Karlaen and his battle-brothers.[5]

Karlaen has worn his mantle of Captain of the 1st Company for two centuries now, and during his service have fought innumerable enemies. During the battle of Forlorn Falls he and his Terminator-brothers broke through the Iron Warriors' defences and destroyed filthy heretics. During the cleansing of Solace in Sorrow — another Space Hulk — Karlaen managed to coordinate battles across ten separated battle zones despite the failure of auspex equipment of the Blood Angels.[7]

Karlaen only was able to arrive to Baal in the final stages of its invasion by the Tyranids. He nonetheless was able to tend to a wounded Chapter Master Dante.[8]

Karlaen is armed with the mighty Hammer of Baal.[6] 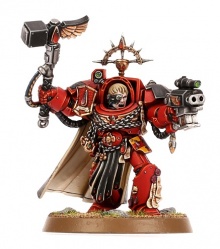