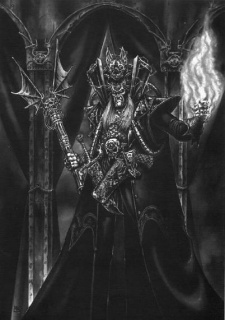 Karloth Valois was a Rogue Psyker and Heretic in Hive Primus on Necromunda.[1a]

Originally living in the Hive-City, Karloth was forced to flee down into the Underhive and even deeper to the hive bottom due to the torment of his latent psychic powers which gave him nightmarish prophetic visions and bombarded him with the thoughts of others. Ever seeking to further distance himself from any other people, he ended up in the Badlands of the hive bottom, where he nearly died many times.[1a]

While scavenging for whatever meagre supplies could be found in such a desolate place he was set upon by a pack of Plague Zombies. They chased him through the abandoned tunnels and vents until his exhausted muscles gave way and collapsing in the filth he succumbed to death. As the Zombies began to eat his wasted frame, something awoke inside him. He suddenly sensed the tiny fragments of a mind that remained to the Plague Zombies, the insatiable hunger that drove them, the raw instinct that governed their actions. Above all this he recognised the simplicity of their minds and reaching out found that he could control them.[1a]

With a last gasp of effort he succeeded in quelling the Zombies' hunger and forced them to stand back and leave him alone. He lay alone in the impenetrable dark of the hive bottom, surrounded by the Plague Zombies as the virus spread from the bites they had given him and into his brain. But Karloth had discovered one other thing he could now do. He drew the tiny slivvers of life-force still within the Zombies into himself and with it was able to stave off death.[1a]

Somehow the neurone plague had altered Karloth's powers and those abilities he had first used to save his life he now found he could use to a much greater extent. He could control the minds of Plague Zombies within a distance, heightening or lessening their hunger, even focussing what little sense of self they still possessed in order to make them more efficient and lethal killers. More than this he found that he could now drain the life-force from any living thing and absorb it into himself, but that this was his only form of sustenance now. He would be forced to prey on the living in order to survive. While he had been lying near death at the hands of the Zombies he had sensed what lay beyond. He had sensed an eternity of darkness filled with unimaginable torment, and ceaseless terror, and he vowed that he would never let death take him.[1a]

Karloth took to a wandering existence, travelling the wastelands of the Underhive, preying on the living when he could and using his packs of Plague Zombies to force others to give him what he needed. In time his reputation grew, to the extent that Gangs would make terrible pacts with him in order to secure his assistance. And all the while Karloth's power was growing, as was his horde of undead, until it inevitably drew the attention of other powers.[1a]

The ranks of the Redemption in the Underhive grew and even more began to flock down from the Hive City to join them in order to oppose the man who they now called soul-thief and life taker. Rumours spread that he had made a pact with the Dark Gods and the Redemptionists marched in an all out crusade to bring his reign of terror to a halt.[1a]

Karloth found that he was suddenly left alone, with no allies to turn to. Everywhere he went he was turned away, people's fear of what he had become and what the Redemption might do to them outweighing anything they might hope to gain by helping him. Karloth retreated into the poisoned lakes and sumps of the Underhive inhabited by the Scavvies and the Mutants but the Redemptionists pursued him there also.[1a]

The Cult of the Redemption pursued Karloth all of the way to the edge of the Abyss where -with his back to the fathomless emptiness- he finally turned to face them. His horde of Zombies charged into the flamers of the Redemption, dried burning flesh raining down to be swallowed by the darkness of the pit below. Karloth drained the life out of the brothers as his Zombies tore into their flesh but the red-robed cultists were fanatical and pressed on inexorably. In the end, Karloth escaped their flames and his inevitable treatement as a Heretic by turning and diving into the bottomless darkness below, crying out in defiance of death to the end.[1b]

The Redemptionists searched the Abyss for weeks looking for any evidence of Karloth's remains but found nothing. But, as every Underhiver knows, nothing can be found in the Abyss which does not wish to be found.[1b] 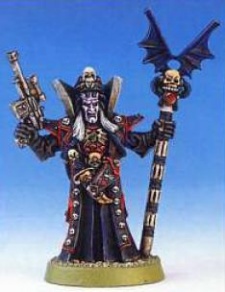