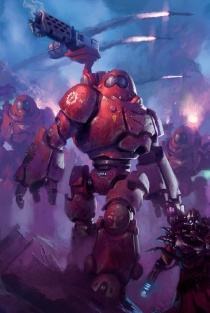 Kastelan Robots with their Cybernetica Datasmith

Kastelan Robot are a type of robotic soldier used by the Adeptus Mechanicus.

A huge, ancient robot built ten thousand years ago, the Kastelan Robot is a perfect example of the Adeptus Mechanicus’ re-purposing of technology. Nearly unstoppable, their only flaw is that of any mere machine; they will follow instructions to the letter, even if this results in their own demise. A specialist Tech-Priest - the Cybernetica Datasmith - must constantly update and reprogram the Kastelan via order dataslates, which placed in the chest slots of this machines, lest this enormous, clanking robot simply stride blindly into a nearby chasm.[1] In rare and extreme cases, the original orders can be changed using a forced 'binaric override' - enhanced static chants of superior Tech-Priests. However, such an action spoils the Kastelan systems, burning out their doctrina wafers.[5]

Kastelan Robots are armed to the teeth and may include two sets of arm-mounted Power Fists or Phosphor Blasters and a choice of carapace-mounted weaponry that includes yet another Phosphor Blaster or an Incendine Combustor. For protection, they are equipped with Kastelan Battlehide that allows for resistance to even Krak Grenades.[2]

It is unknown what relation they have to the older Great Crusade-era but similarly named Castellan Class Robot.

In addition to robots that belong to certain Forge Worlds, there are also "itinerant" Kastelan Robots that are older than the Imperium and some call no single forge world home. Bands of these machines may appear in battle and join to congregations of the Cult Mechanicus to help them. This phenomenon is taken as a sign of great favour from the Omnissiah. Itinerant robots allow themselves to be directed by local Tech-Priests and fight on until the batlle is won. After that they dissapear as mysteriously as they previously arrived, perhaps for centuries at a time.[4a]

Unlike "standard" Kastelan Robots that represent themselves in the strict colours of existing Forge Worlds, these ancient machines can be literally any colour scheme, sometimes even appearing very bright and/or colourful.[4a] 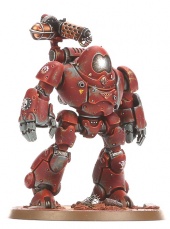