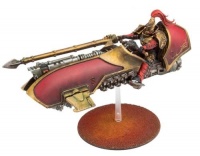 The Kataphraktoi are one of the warrior-castes within the Adeptus Custodes.

The Kataphraktoi served as the fast attack and reconnaissance units of the Custodes, operating most frequently in Agamatus Jetbike Squadrons or Vertus Praetors[2]. In battle these formations would behave as the cavalry units of old: raiding the enemy, exploiting weak points, and acting as special response units. The Kataphraktoi also operate the Custodes fighters and gunships.[1]

Among the Kataphraktoi the most popular jetbikes were the Paragon pattern and Gyrfalcon Pattern.[1]

The Cataphract were a famous type of Central Asian cavalry.