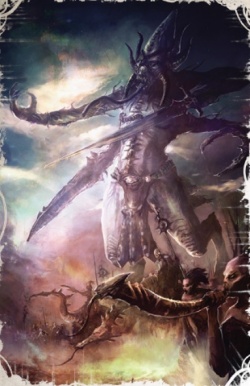 A Keeper of Secrets

Keepers of Secrets are the Greater Daemons of Slaanesh.[1] Created subconsciously by the Prince of Pleasure, these Daemons are the ultimate manifestation of his desire for physical excess and pleasure in battle. [4]

Each Keeper of Secrets has a unique appearance that mirrors Slaanesh's mood at the time of its creation. Their looks can range from terrifyingly-haunting-but-almost human to bestial, though all are tall and lithe with long claws and limbs and a crown of horns that sprouts from their head and intoxicating eyes that look like black crystals.[1]

As well as being vicious warriors, Keepers of Secrets are also capable of weaving powerful spells of misdirection and mystification. They invade the thoughts of their enemies, sending them visions of glory, titillating their egos, and caressing their inner desires to lead them astray. They seek to give and receive sensation in all forms, be it pain or pleasure, but there is nothing more enjoyable to them than the corruption of the noble and pure. They also are surrounded by a breeze that confuses all enemies around and allows the daemon to prey on them easily.[1]

The Keepers of Secret live to feed from others' emotions, especially fear, hope, and despair. They love the sensation of cutting through flesh and bestowing the feeling of pain onto their enemies.[1] As well as striking amazingly fast with their limbs, they also cause corruption in another way: they love to turn emotions such as courage, bravery and valour into selfishness and other emotions.[4]