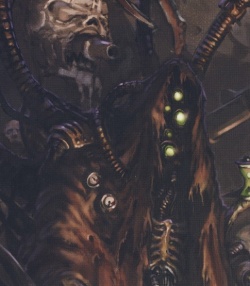 Kelbor-Hal after his fall to Chaos

Kelbor-Hal was the Fabricator-General of the Mechanicum during the Great Crusade and Horus Heresy.[2] He joined forces with Horus and assisted the renegades with all of the technology available to mankind, forming the Dark Mechanicum.

Kelbor-Hal was present when the Emperor first arrived on Mars, and, while the Master of Mankind was widely celebrated by most of his colleagues, he was deeply distrustful of the Terran warlord.[2]

Hal and his followers were among those who refused to see the Emperor as the avatar of the Omnissiah, instead only seeing a False prophet who had subordinated the Mechanicum under the Imperium's heel with lies and falsehoods. Kelbor-Hal feared that the Emperor and His forces were going to strip away the autonomy Mars had enjoyed dating back all the way to the Dark Age of Technology. Despite this disdain, eventually Kelbor-Hal was able to rise through the Tech-Priest hierarchy to become Fabricator-General by the late Great Crusade. He gathered around him a circle of like-minded Magi including Urtzi Malevolus, Lukas Chrom, and Melgator.[2]

At the outbreak of the Horus Heresy, there were high tensions between the various Magi governing Mars. Seeing an opportunity for a powerful new ally, Horus sent Regulus into this powderkeg and he was able to convince Kelbor-Hal to join forces with the Traitors on the condition that the autonomy of the Mechanicum be ensured, that the STCs the Sons of Horus had captured from the recently subjugated but technologically advanced Auretian Technocracy be handed over to him, and that the Martian Vaults of forbidden technology be opened for Mechanicum use. In the ensuing Schism of Mars between rebel and loyalist Mechanicus forces, Kelbor-Hal's new Dark Mechanicum emerged victorious.[2] However after the Schism Mars was blockaded by the Imperial Fists and Kelbor-Hal was contained on the Red Planet for the next several years, forcing to rely on his Nine Disciples to act as his emissaries in Horus' fleets.[3] Also during the Heresy, he oversaw the construction of the Furious Abyss in the shipyards around Jupiter for the Word Bearers, after which it was used to attempt to destroy the Ultramarines Legion and their homeworld, Macragge.[1]

Following the Solar War, the loyalist blockade of Mars was lifted and Kelbor-Hal was able to take direct command of the Dark Mechanicus war effort again. Arrogant and gaudy, he attempted to take credit for many of the achievements of Perturabo and Sota-Nul during the Siege of Terra.[4]

Nonetheless, in the end the traitor forces were defeated following the Battle of Terra, but the ultimate fate of Kelbor-Hal remains unknown. 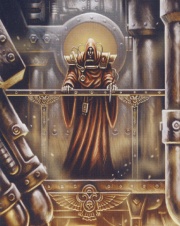