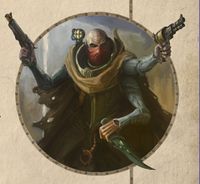 Kelermorphs are a type of Genestealer Hybrid that specialize in inspiring the Cult's members and spreading terror among its foes.[1][2]

To the oppressed masses of a Genestealer Cult, the Kelermorph is a figure of legend and revolutionary hero battling authoritarian rule. To the enemy, he is a figure of dread that seeks to tear down the foundations of civilization. In reality the Kelermorph is a lifeform created for the purpose of exploiting mortal psychology, a cold-blooded killer in the guise of a legendary gunfighter whose actions inspire revolution and sedition. In battle, they wield three Liberator Autostubs and a dagger with supreme efficiency.[2]

The Kelermorph is a late refinement of the third generation cycle of Genestealer Hybrids, produced from the finest genetic strains of the local populace. They are gifted with hyper-sensory powers that allow them to perceive the world around them in acute detail and rapid-firing neurons allow them to react with supernatural speed. They are also possessed with enhanced pheromonal senses and thermoceptive vision that allows for pinpoint marksmanship even in pitch darkness. These creatures are in essence bio-crafted to be the heroic face of their cult and indicate a Patriarch's growing mastery of human psyche.[2]

Pox-faced Gangers and upper-Hive dandies alive style themselves upon legendary Kelermorphs when they become known, seeking their trails of mysterious wyrm-symbols across their Hives and in doing so falling into the embrace of the cult. Indentured workers risk their lives to smuggle traces of lethal chemical elements out of arms factories in order to fashion these into rare depleted volonium bullets for the Kelermorph's use. These bullets can pierce Power Armour and even the hulls of light tanks. The crafting of these munitions is often lethal for workers due to their radioactive nature, but such is a Kelermorph's charisma that he can engender total devotion in his followers.[2] 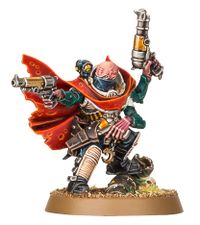