The Keys of Hel are seals placed on forbidden technologies from the Dark Age of Technology or of alien origin by Ferrus Manus, the Primarch of the Iron Hands Space Marine Legion.[2]

What are the Keys of Hel?
They are the fires taken from the mountain. They are what should not and must not be. Only in the last days of humanity, when law has no meaning, should any think to break the locks placed upon them.[2]

The Keys of Hel were named for a mythic goddess of the Medusan pantheon, a covenant to lock away technologies expressly forbidden by the Primarch Ferrus Manus. When these technologies were encountered during the Great Crusade, they were seized and locked away in the vaults beneath Medusa or buried on barren rocks in lifeless star systems, their locations known only by the primarch and a select few Iron Fathers.[4] Rumoured to be withheld even from the Mechanicum, the existence of these technologies was known to few outside the Iron Hands Legion, and even within it few knew more than the names.[2]

After Ferrus Manus was killed in the Dropsite Massacre, some of the Iron Hands "turned the Keys of Hel", seeking any advantage that would help them exact vengeance on the traitors.[1] 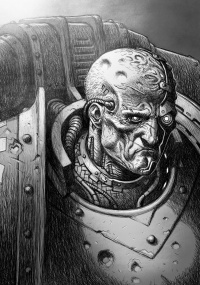 Cybernetic Resurrection was one of the possible applications of the forbidden technologies, restoring the dead to a facsimile of life.[2] The Ghola, often called Revenants,[3a] retained their memories and were capable of speech.[1] Repeated resurrection was possible even after a Revenant was "killed" again.[2]

Revenants were kept in a cryogenic state at sub-life support temperatures until they were awoken for battle,[1] gradually getting slower the longer they spent away from the machine. Iron Father Kastigan Ulok modified the standard operating protocols of his cryo-stasis vault to protect it against a catastrophic shut-down, neuromorphic subroutines bordering on Abominable Intelligence.[3b]