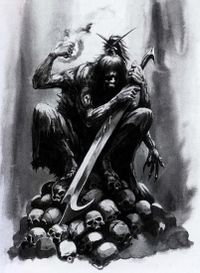 Kheradruakh, also known as the Decapitator, is the long-lost monarch of the Mandrakes whose name literally translates to He Who Hunts Heads. A dark legend and patron saint of murder even in the eyes of other Mandrakes,[4a] he rules the shadow-realm of Aelindrach that now spills over into Commoragh.[5]

"And behold there was one among them name Kheradruakh - He Who Hunts Heads - the Decapitator. A thousand skulls lined his lair; a thousand lives ended swiftly on his blades. None were safe from the Decapitator who moved through the shadows like the breeze through the air. No guard could mark his passing. No shield could ward his blows. None could stop him from seeking his prize. How could one name the price of certain death for any foe? I cannot say, but rumour tells of a hundred times a thousand given over in sacrifice, bartered for the death of a single enemy."[1]

Kheradruakh has lived since at least the time of the Horus Heresy,[6] who might once have been one of the Eldar race before becoming a Mandrake[4a] — believed by some to be the first and greatest.[4e] He made his lair in the slowly-expanding realm of Aelindrach in Commoragh,[4b] considering all creatures from other realms only as prey to be hunted.[4c]

For eight millennia,[5] Kheradruakh killed seemingly at random, occasionally joining a realspace raid unexpectedly or working as an assassin for a steep price in souls.[2] He would hunt his prey for decades across a dozen worlds if necessary, lying in wait for weeks to await the perfect moment to strike.[4b] He took the heads to his lair where he stripped them to the bone, smashing those that did not meet his requirements, but adding the few that did to one of the thousand niches in the hemispherical walls. Each skull, still containing an echo of the soul, stared at the same point above the central dais.[2] During the Long Midnight in 891.M41, he claimed an unprecedented seven worthy skulls in only six cycles.[3]

When the resurrection of El'uriaq, Tyrant of Shaa-Dom, triggered a Dysjunction that threatened to open the hole in reality in Kheradruakh's lair before the collection was complete,[4a] Kheradruakh was disgusted by the part played by the Mandrake brother-kings Azoruakh and Xhakoruakh. He had no interest in their rivalry,[4c] viewing their thinking as tainted by the goals of outsiders and an affront to the nature of Aelindrach. Kheradruakh killed Azoruakh as he fled in defeat from his brother[4e] before retuning for Xakoruakh as well.[4f] Both were judged worthy, finding places directly opposite one another in Kheradruakh's lair. With the conspiracy ended, the fabric between realities was stabilised, though Kheradruakh believed he sensed a stirring on the other side.[4g]

After the partial awakening of Ynnead created another massive Dysjunction that caused Commorragh to fall into chaos, Kheradruakh killed Archon Sythrac, claiming his head as the final skull required to bring the shadow-realm of the Mandrakes into the Dark City. For a dozen miles around the Decapitator's throne, Commoragh became a sea of living shadow that consumes even daemons.[5] 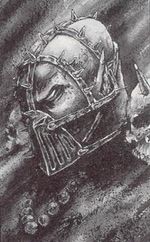 Like all Mandrakes, Kheradruakh has chameleonic shadow-skin, which combined with his exceptional skills of stealth makes him virtually invisible and allows him to slip out of the slightest shadow to ambush his prey. He has no eyes in his hollow sockets and an additional set of taloned arms, possibly the work of a Haemonculus.[1][2]

Kheradruakh's weapon of choice is a blade that bears his same title. It is said that no form of shield can protect from it.[1] It takes the form of a straight, sharp sword of dark metal.[4a]