Khorne, the Blood God, is the Chaos God of anger, violence, and hate. Khorne was the first to awake of the four Gods of Chaos, fully coming into existence during Terra's Middle Ages - an era of wars blooming in the wake of his birth. Every act of violence gives Khorne power, whether committed by his followers or by their enemies. His titles include the Lord of Rage, the Taker of Skulls, the Lord of Battle and the Master of the Brazen Throne.[16b][17b][20f][23] 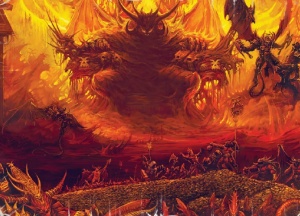 Khorne on his Skull Throne[13]
The name "Khorne" derives from his Dark Tongue name, "Kharneth", meaning "Lord of Rage" or "Lord of Blood".[Needs Citation] 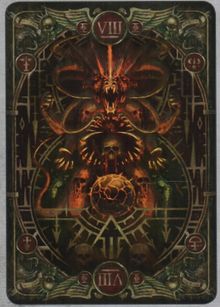 Although Khorne despises the use of magic and accordingly hates Tzeentch, Slaanesh is the one he loathes most of all. Khorne and Slaanesh personify two entirely opposing aspects of Chaos, and Khorne considers Slaanesh's self-indulgent sensualities insulting.[16a] Khorne is said to have inherited the instinctive values of martial honour, pride and bravery, some of Khorne's followers using these to justify their killings. But Khorne's most fanatical worshippers know that Khorne cares not from where the blood flows, only that it does - all else is meaningless artifice.[16a][17a][19a][20f] His associated number is eight, reflected in the organisation of his armies, and in smaller matters such as the number of syllables in a daemonic follower's name.[18][20a]

Images of Khorne show it to be a mighty being, sitting upon a great throne of brass atop a mountainous pile of bleached skulls centered in a lake of blood. The skulls are of all those slain by Khorne's Champions, and of all his slain Champions, ranging from human heads beyond counting to gigantic Tyranid skulls the size of hab-blocks. The mountain slowly grows ever higher. Khorne himself is most commonly depicted as a gargantuan figure, broad and muscular, with a snarling hound-like countenance brooding beneath his red and black armour of brass and iron. His every word is a growl of inexhaustible rage, and his roar is that of pure bloodlust, echoing across his realm .[16a][19b][20f]

Khorne's domain is known as the Fortress of Khorne and includes his Brass Citadel.[14]

Khorne's followers are warriors without exception, if only in mind than in occupation. His followers build no temples but rather worship him on the battlefield. To devote time to building temples rather than fighting for something would more likely incur Khorne's wrath than please him. Worship of Khorne is purely through bloodshed, either from one's enemies in victory or one's own through earnest struggle; it is said that any follower who allows a day to pass without contributing to this act of worship will incur Khorne's displeasure.[18][20f]

The battle-cry of the followers of Khorne reflects his desire for wanton violence and is feared by all who hear it: 'Blood for the Blood God! Skulls for the Skull Throne!'.[Needs Citation]

In the mythology of the primitive inhabitants of Fenris, "Ghorghe" (presumably a misinterpretation of Khorne) is an evil deity, described as the offspring of the dark god Horus and the dragon goddess Skrinneir, and is imprisoned within one of the planet's volcanic islands after being defeated by Leman Russ[9].

Why Khorne is connected to the number eight is unknown, but it has been so since the warp first echoed to his fury. His affinity for the figure, and any of its multiples, is strongly reflected in the organisation of his legions – from the number of Bloodthirster ranks to the number of cohorts in a full strength legion. It is a number that also appears throughout the Blood God’s domain in the immaterium, as eight enormous towers ring the Brass Citadel, and a Daemon slain in realspace must complete eight tasks before Khorne will once again give them shape. In the most sprawling of battles within the warp, it is always Khorne’s eighth wave that is the most powerful. Even his mortal worshippers recognise and revere the sacred number, using it in their blood-soaked summoning rituals and carving it upon their flesh in gruesome ceremonies. The seers of many races have foretold that only after eight ages of war have passed will Khorne’s blood-thirst finally be slaked by a last, apocalyptic battle.[22] 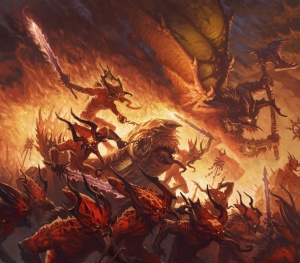 A horde of Khornate Daemons

The Daemonic Legions of Khorne are collectively referred to as the Blood Legions. They are the largest and most martial of the Daemonic armies of the Immateriun. Though savage and unrestrained, they nonetheless have a strict hierarchy determined by martial prowess. Each of the innumberable Blood Legions are divided into eight cohorts, each of which is led by a Khornate Daemonic Herald or Daemon Prince. The Blood Legions specialize in melee combat, though variants do exist. Red Tide Legions are made up of Bloodletters which overrun the foe in waves of attacks while Hellfire Legions specialize in siege warfare and Daemon Engines. Brazen Thunder Legions are the most mobile of Khorne's Legions, made up of Bloodcrushers, Blood Thrones, and Flesh Hound packs.[22]

A Daemon Engine is a part-technological, part-daemonic vehicle, those dedicated to Khorne include:

Not all Khornate Space Marines are descended from the World Eaters, some of these warbands include - 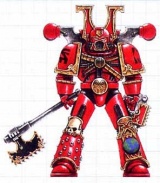 As with all the Chaos Gods, Khorne will often reward his most favoured followers with special gifts and blessings. Khorne's gifts can take many forms, including physical mutations, daemon weapons or heightened strength. 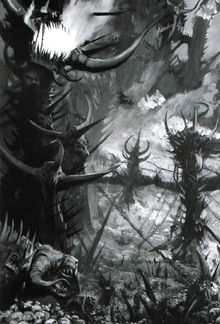 The Fortress of Khorne

The Fortress of Khorne

The Fortress of Khorne is Khorne's realm within the Warp. It is a monument to fury and bloodshed, and is built upon foundations of murder and conflict. This blood-soaked realm echoes constantly with Khorne's bellows and the clash of weapons.[14]