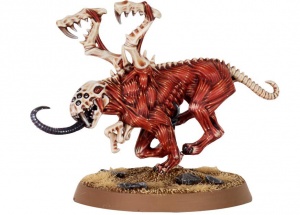 Khymerae are Warp-beasts born from the stuff of a Daemon World. They coalesce around vivid nightmares into terrifying forms of long-fanged, many-eyed, sinewy cat-like beasts.[1]

Dark Eldar Beastmasters enter dream-quests in order to hunt down Khymera in the spirit realm and draw packs of them back into Realspace. They then enslave them as half-real nightmares that can wreak utter havoc upon a battlefield before fading away like mist.[1]

Kyhmera are utilized by some within the Forces of Chaos as they are useful of tracking down Psykers or anything else with Warp-taint. As they exist in a state of half-immaterial half-material, they are useful in fighting Sisters of Silence.[3]

In older editions, Khymerae were known as Warp Beasts, creatures harnessed by Wych cults that were living embodiments of the fear and terror slaves experience. They were extremely predatory in nature and would attack whatever they saw. They were often lead by a Wych Beastmaster to ensure that they attacked the intended target.[2]