Kiavahr is a Forge World whose moon, Deliverance, houses the Fortress Monastery of the Raven Guard Space Marine Chapter. The planet also houses a Titan Legion known as the Legio Vindictus.[1] 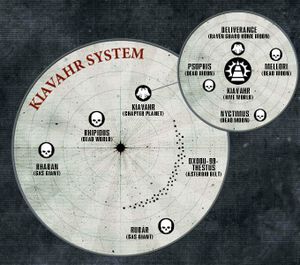 Map of Kiavahr and its System[3]

Kiavahr is populated by billions of craftsmen and workers who work and reside in the many hive cities and fabrication plants which cover the planet's surface. Together with Deliverance, the two worlds produce an amount of ordnance and war machines almost equal to a Forge World. The planet's atmosphere is highly toxic - a result of millennia of industrial pollution - which results in incidences of mutation far above the normal levels. This level of mutation stretches the tolerance of the Adeptus Ministorum, but the volume and quality of materials the two worlds produce (and, presumably, the presence of the Raven Guard) mean that more leeway is granted than would usually be the case.[1]

Kiavahr has four moons but only the closest moon, Deliverance, is inhabited. The outer three moons (Psophis, Mellori and Nyctimus) are Dead Worlds.[3]

For centuries before the arrival of Corax, Kiavahr and its prison moon Lycaeus were ruled by powerful Tech-Priests and Forge-Guilds based from their capital of Nabrik, using the billions that toiled on both celestial bodies as slaves. However after Corax led a successful revolt against the Guilds on Lycaeus and the subsequent nuclear bombardment of Kiavahr, the Guilds were overthrown and the masses freed. While thousands had died and parts of Kiavahr were reduced to a nuclear wasteland, millions had been saved.[2]

Later during the Horus Heresy, the Alpha Legion instigated a rebellion against Corax's authority on Kiavahr, though in the end this too was defeated.[1]