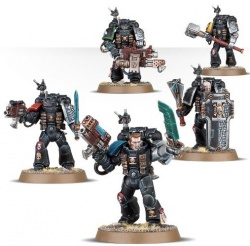 Kill-Teams are the standard organizational unit of the Deathwatch Space Marines.

These Teams are organized to hunt down and kill Xenos and consist of Battle-Brothers from many different Chapters.[1] Kill Teams are often temporary units, with a team being disbanded and its members spread to other teams in order to disseminate knowledge on fighting certain types of xenos.[4a]

The basic organizational structure of a Kill-Team consists of one Sergeant and between four and nine Deathwatch Marines. Deathwatch officers invariably choose their members of their Kill Team in order to draw on as much relevant experience as possible. With different Chapters having long-standing specializations, it is easy to identify those who will have the most relevant insights in a given circumstance. Long-standing rivalries between certain chapters, such as the Dark Angels and Space Wolves, can effect the capabilities of Kill-Teams but more often than not members of these squads will eventually establish bonds of firm friendship.[3b][4a]