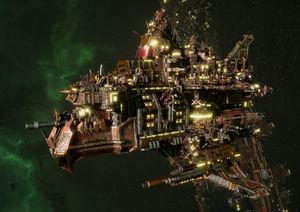 The Kill Kroozer is the most common style of Ork Kroozer, armed to the teeth with gunz, Heavy gunz, and occasionally torpedo launchas.[1]

Already a terror to shipping in the Gothic Sector during peacetime, the number of Kill Kroozer sightings increased during the Gothic War, presumably due to the increased number of hulks available for salvage. Despite this, only one Kroozer, the Butcher, was repeatedly identified, though this may be partly attributed to the constant repairs, rebuilding, and "improvement" that Ork ships tend to undergo.[1]