Kill Krushas are massive tanks based off the Orks' love of speed and mass killing.[1] 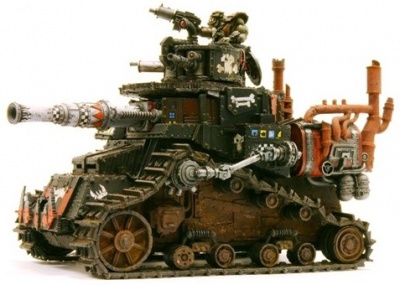 These "mirakles" of Orkish Mekboy fabrication are alarmingly complex creations, high-sided and heavily armoured, whose internal spaces are filled with a mass of hydraulics, pistons, mechanised loader-gubbins and a very large and extremely temperamental engines. These are all tended by the frantic ministrations of numerous Grots who keep the rattling monster tank going with constant hammer blows, polishing and judicious application of oiler squigs. The tank’s main gun is its Krusha Kannon; a heavy bore, high velocity weapon capable of firing a variety of different shells.[1]

The first Kill Krushas were believed to have been produced by the infamous Murda-Meks of Tigrus, —once an Imperial forge world overrun by the Orks in M.35 but has been churning out weapons and war machines for the highest Ork bidder ever since, and the Kill Krusha design has spread to numerous Waaaghs across the galaxy.[1]

A massive Krusha Cannon that can shoot a variety of rounds:

Some Kill Krushas have been seen with two Gretchin Sponsons mounted with Big Shootas.[1]

The auto-loader gubbins are incredibly complex, and do not always work as they should. There are sometimes jams from mechanical failure, or the Grots get caught in the gears. Othertimes the Grots load the wrong shell. The worst possible failure would be the shell being fitted in backwards, causing it to simply go off inside the tank and causing horrendous damage.[1]