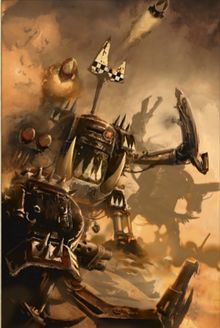 A group of Killa Kans

Killa Kans are small Orkish walkers, similar in design and function to the larger Deff Dreads. Because of the complex nature of the mechanical and biological interactions that goes into the creation of a killa kan, they are designed and built by Meks and Painboyz working together.[1]

A Killa Kan has a simple, crude design which consists of a large metal can mounted on two piston powered legs, although as with anything Orkish there is a large degree of variation. They are most often armed with a single heavy weapon welded onto one shoulder and a heavy saw or pincer close combat weapon on the other. Unlike the Deff Dread, Kans are piloted by a hardwired Gretchin, not an Ork. The process of interning a Grot into a Killa Kan is not unlike that which is used to create a Space Marine Dreadnought, but the process is far messier and more primitive. However unlike most Orks, Grots are all too eager to get the chance to pilot these smaller machines, and after implantation they will usually celebrate their new life by stomping whoever had previously bullied them into a fine paste. The new level of power a Killa Kan gives a Gretchin often sees the creatures aggression level increase massively.[2]

Despite the drawbacks of experiencing incredible pain and bloodlust the sheer power and glory promised by becoming a Killa Kan pilot drives many Gretchin mad with desire. Dreams of bloody revenge and lording their new-found power over their former tormentors are the most common motivators, and there is never a shortage of volunteers to become Killa Kan pilots. Indeed, competition between Grots for the honour of becoming a Killa Kan pilot is so fierce and bloody that many Grot mobs and Mek workshops have instituted a simple lottery system by which they choose candidates for implantation. Once chosen and implanted into their new bodies, many Killa Kan pilots go on murderous killing sprees upon activation. Gibbering and howling, they flail about, dishing out well-deserved justice to former bullies and oppressors with their whirling saws, slashing power klaws, and chattering heavy guns. Most Orks find these bloody spectacles hilarious, at least those who are not on the receiving end of the new Kan’s fury. A raucous and violent festival atmosphere often accompanies the brutalities that follow the creation of a new batch of Killa Kans.[2]

Even with the increased fire power, Killa Kan pilots still display cowardly behavior. While they are usually deployed in small squadrons of two or three to take advantage of safety in numbers, some Kans have been known to run from the battlefield at the first sign of danger. Kans are kept asleep in pens in-between battles where they can do no harm to the rest of the tribe.[2]

Killa Kans are typically equipped with: