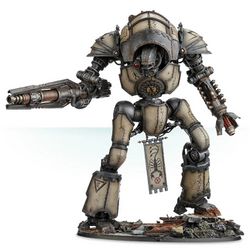 The Knight Atrapos (also spelled Atropos[2]) was a type of Imperial Cerastus Pattern Knight in service during the Great Crusade and Horus Heresy, where it was one of the rarest and most potent vehicles of its class.

Bearing particularly rare and destructive weaponry of annihilation, the Cerastus Knight-Atrapos was created solely to destroy heretek engines and xenos war machines whose very nature and existence were considered a blasphemy to the Omnissiah. The machine spirits of the Knight Atrapos are said to carry with them a cold and all-destroying hunger, and for the scion who bonds with them, madness is a constant risk.[1]