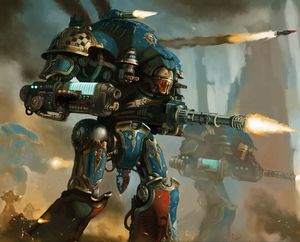 The Knight Castellan is a Dominus-class Imperial Knight, that excels at destroying its enemies at long-range.[1]

Essentially a mobile towering fortress, a Knight Castellan is piloted by a single high-ranking Noble Lord and armed with a vast array of fearsome long-range weaponry. It is the foremost artillery platform within the lances of the knightly houses, hammering the enemy at extreme range from the moment the fight begins.[3b]

The Knight Castellan is one of the two most popular patterns of the Dominus-class chassis, the other being the Knight Valiant. With its dual plasma core sending energy surging through its huge frame, the Castellan can mount a frightening array of weapons systems while maintaining its ion shield against incoming fire. Indeed, in extreme situations, Dominus pilots have even been known to overcharge their shield capacitors in order to temporarily project their shields over nearby allies to protect them from harm. It is considered both crass and unnecessary to do this for another Knight, but other Imperial forces fighting alongside Dominus Knights have been given good cause to thank the Nobles for their protection.

The Knight Castellan is armed with a legendarily vast arrange of weaponry. Its primary weapons are a Volcano Lance and Plasma Decimator on each arm. Its carapace is armed with two Shieldbreaker Missiles or Siegebreaker Cannons as well as two twin-Melta Guns.[2] 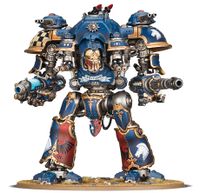