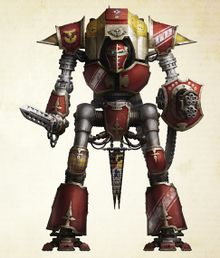 Knight Castigators are a pattern of Imperial Cerastus Pattern Knight.

The Castigator is designed to take down hordes of lesser foes that could overwhelm other patterns of Knight through sheer numbers. They accomplish this with a hail of rounds from their Castigator Bolt Cannon.[1] The Castigator is also equipped with a Tempest Warblade that can easily destroy enemy vehicles including even fellow Knights.[2]

The Castigator is used by households faced with hordes of enemies. The suits are most often claimed by a Household's most renowned veterans who have proven they can hold the line and conserve ammunition while supporting their kin. Some younger pilots are also drawn to the Castgatior, basking in the armor's firepower and warblade strikes, though such scions rarely act as mere support units.[3]

Notable among its ilk, the Castigator is renowned for the stoic nature of its Machine Spirit whose vigor is difficult to rouse and almost impossible to ignore.[3] 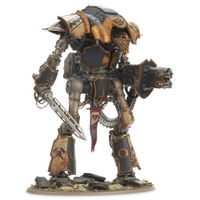