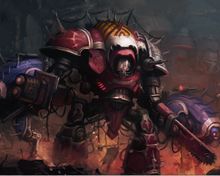 The Knight Despoiler is a type of Renegade Knight.[1]

The Fallen Noble pilots of Knights Despoiler vehemently repudiate honor and valor in every form. The burning hatred with which they are filled comes from long exposure to their corrupted Thrones Mechanicum, coupled with the slow erosion of reason and purpose over decades of endless war. Behind each such Knight lies a long history of terror and cruelty, defined by selfish acts and the pursuit of personal power no matter the cost. Unshackled from notions of propriety and obeisance, Knights Despoiler often strive to become absolute rulers of their households by crushing anyone who could challenge their reign. Knight Despoilers at first glance seemingly appear little different from their Imperial counterparts and they wield a large array of armaments and wargear with each pilot having its own preference. House Mykorphas for example worship Nurgle and thus have their Knights Despoiler become slowly coated in living rust and wield plague-ridden weaponry. House Thryn by comparison have their Despoilers wield solely Reaper Chainsword.[1] 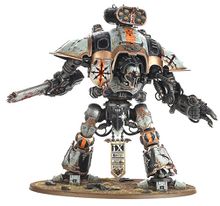