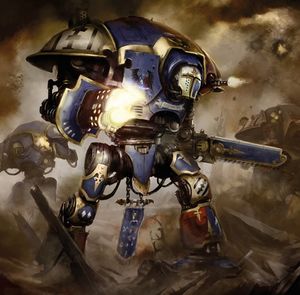 Knight Errants are a common type of Imperial Knight walker.

The aggressive nobles who pilot these Knights lead the charge of Knight Houses when they go to war and prefer to fight at the forefront of battle, hunting enemy tanks and war engines or charging into the fray. Where a Knight Paladin is equipped for a flexible battlefield role, a Knight Errant specializes in close range actions. Indeed, so effective are the Knights in this capacity that Imperial officers will do everything in their power to requisition the services of such a valuable military asset, never more so than when they are expecting to face a super-heavy or Titan-class threat.[1][2]

In the heat of battle, where a normal warrior tires as the exertions of combat take their inevitable toll, a Knight Errant is as relentless as the tide: an unstoppable engine of death, capable of overcoming the mightiest of foes, no matter how large or heavily armoured they may be. With its heavy adamantine armour and Ion Shield, a Knight Errant will have no compunction about charging straight at the enemy in order to close the distance, all the while using its formidable thermal cannon to devastating effect. Countless times have heretics, believing themselves safe within their fortified strongholds, watched in horror as the walls around them have melted and sloughed away to reveal a Knight Errant ready to butcher them in their own sanctuary. Even should a foe not be immediately incinerated by the thermal cannon, a Knight Errant carrys a Reaper Chainsword or Thunderstrike Gauntlet in their other arm to finish them off. Finally, the Knight Errant is also armed with a Heavy Stubber mounted in its carapace to cut down infantry.[1][2]

Knight Errants are also capable of carrying additional weapons, such as an Ironstorm Missile Pod, twin Icarus Autocannons, or a Stormspear Rocket Pod, mounted on their carapace. Some will also replace the heavy stubber with a meltagun.[2]