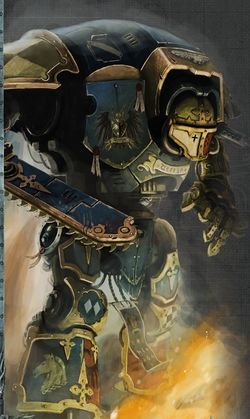 The Knight Gallant is a class of Imperial Knight.

Designed to smash apart enemies at close range, very few enemies can withstand the initial assault of the Knight Gallant. The ground shakes as the Knight Gallant stomps forward, closing in on their prey - with deceptive speed this hulking robotic form is within range, and unleashes the fury of both Reaper Chainsword and Thunderstrike Gauntlet. It is also equipped with a back-mounted Ironstorm Missile Pod or Stormspear Rocket Pod. A Knight Gallant will slam into enemy lines like a tidal wave, and come out of the other side unscathed.[1]

A noble designated to pilot a Knight Gallant will learn the three basic tenets when he is bonded with his war machine. Though they may subtly differ, the three basic tenants are to trust in your Ion Shield, make all speed towards the foe, and strike swift and sure.[2]

When a formation of Knights Gallant takes the battlefield, it is sure to attract a disproportionate amount of the enemy’s firepower. Indeed, most foes will do anything they can in the hopes of preventing the Knights from reaching their front lines. Since the Great Crusade there have been many tales of the devastation wrought by these aggressive Knights, for their bold and reckless attacks have made them famous across the galaxy.[3] 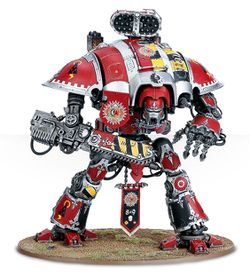